Mustang Back in the Driver’s Seat

Pony car takes down rival Chevy Camaro for first half of ’13. 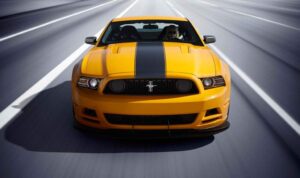 Coming at ya! Ford's Mustang regains the sales lead over Camaro for the first half of 2013.

The shoot-out in the pony car corral has a new winner – at least for now.

After losing momentum to the newer Chevrolet Camaro, the Ford Mustang has regained the sales lead, June numbers show – just in time to mark the countdown to the classic muscle car’s 50th anniversary.

Though other models have come and gone, few rivalries have been more intense than the Mustang – Camaro battle that has waged over the decades. But that’s not to say the competition is out of the fight entirely. Posting a sharp 27.2% gain last month, the Dodge Challenger is now back in the hunt, as well.

Mustang made its debut 50 years ago next April, the Camaro a little more than two years later. And for decades they continued to swap sales leads. But by the turn of the new Millennium, the Chevy pony car lost its momentum and was pulled from production in 2002 – along with its near-twin, the Pontiac Firebird – giving Ford virtual free rein, especially after a retro Mustang made its debut the following year. 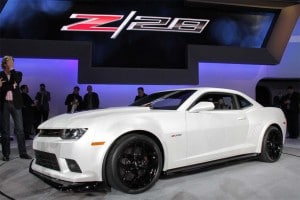 Chevy doesn't intend to concede and has some hot new offerings for 2014, including the revived Camaro Z28.

But Chevy wasn’t ready to cede the profitable market entirely, and at the 2006 Detroit Auto Show, the General Motors division made headlines when it pulled the wraps off its own, old-is-new design.  With GM’s finances in freefall it wasn’t clear what would happen with the concept but two years later the pony car returned in production form, the first new Chevrolet Camaro rolling off the assembly line in February 2009, just months before the parent company plunged into bankruptcy.

(For more on the muscle car shoot-out, Click Here.)

If anything had the muscle to help pull GM out of its financial morass it was the 2010 Chevy Camaro, an instant success that quickly reshaped the established order in the pony car segment where Mustang ruled supreme and secondary players like the Dodge Challenger settled for scraps.

The automotive equivalent of the Hatfields versus the McCoys was  turned upside down when Chevy’s new entry outsold its Ford rival in 2011 – the first time that Camaro came out on top since 1985. Ever since, Mustang has settled into an unfamiliar role, regaining the sales crown only occasionally, notably last November.

Chevy seemed to be off to a good start in 2013, but with big plans for a year-long Golden Anniversary celebration, Ford has pulled out all the stops.  It emerged on top again in May, and June’s strong lead helped Mustang claim victory for the first half of 2013, as well.

(Click Here for a look at the updated 2014 Chevrolet Camaro.)

Then again, it’s a bit of a Pyrrhic victory. Even though high fuel prices had little impact on the revival of the pickup segment, performance car buyers seem to have been more prone to hold back.  Mustang sales tumbled 9.9% in June, to 10,263 – but Camaro took an even bigger, 20.7% plunge, to 5,191.

Curiously, the Dodge Challenger actually gained ground, up 27.2% for the month, and at 5,191 sales, it’s now almost within striking range of its two better-known rivals.

Ford appears determined to maintain its newfound lead and will take every opportunity in the months ahead to promote its pony car’s striking longevity.  But the better news for Mustang fans is that the long-awaited replacement is likely to make its first appearance at next year’s New York Auto Show – indeed, the timing would be appropriate, as the original coupe made its public debut at the New York World’s Fair on April 17, 1964.

But the folks at Chevrolet aren’t going to sit on the sidelines. And they’re hoping a mid-cycle update of the Camaro coming for the 2014 model-year will blow out Mustang’s birthday candles ahead of time.

(Find out more about the top-secret 2015 Ford Mustang. Click Here.)

For those keeping track, incidentally, while the latest version of the Chevrolet Camaro may be giving its rival a run for the money, but in nearly half a century, Ford has sold 1.02 million Mustangs – including the 100,000 American fans snapped up in its first 90 days, more than the maker expected to sell in an entire year.  Even adjusting for its more than seven years off the market, Camaro is a distant second in the sales sweepstakes.  Since it debuted 47 years ago, Chevy has delivered just 345,000.