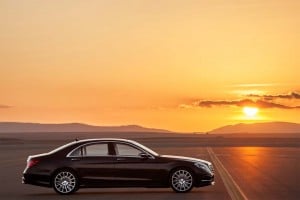 Mercedes faced a significant challenge with the redesign of the S-Class: the maker's flagship sedan.

How do you enhance an icon? That’s the challenge Mercedes-Benz faced when the German maker set out to redesign its flagship S-Class sedan – a vehicle likely to spur big changes across the premium-luxury market.

While there are faster cars, more expensive cars and more exclusive cars, the S-Class has long been the benchmark in the premium luxury segment. And that’s a position Mercedes intends to maintain with a new 2014 model that not only introduces a raft of safety technologies that come a step short of autonomous driving, but also by adding such over-the-top features as an automated perfume dispenser and a hot stone-style massaging seat.

“The definition of luxury is changing, but we intend to be at the forefront of that,” said Steve Cannon, CEO of Mercedes-Benz USA, during a break from driving the new S550 model through the lake country north of Toronto. 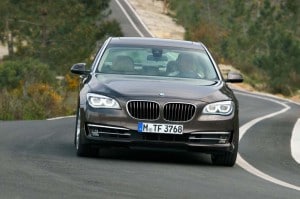 Mercedes is looking to remain atop competitors, like the BMW 7-Series, in the premium luxury segment with the new S-Class.

Indeed, much has changed since the last S-Class line debuted in 2005. It rolled into showrooms at a time of unbridled excess, and in the automotive market, it defined the luxury segment. The Teutonic sedan hit its peak a year later with Americans snapping up more than 30,000 of the S-Class variants, including the S550, the high-performance S63 AMG and other models.

But four years later, the U.S. economy in turmoil, demand fell to barely 12,000. It wasn’t just a lack of buyers but also a shift in mindset, many industry analysts suggested. And they could point to a dramatic shift in the marketplace. Even as sales of premium luxury models – which also included the big BMW 7-Series, the Audi A8, Jaguar XJ and Lexus LS – dried up, there was a newfound momentum at what might be called the bottom of the upscale market.

Today, the biggest growth can be seen in the compact sedan and crossover luxury segments with products like the BMW 1- and 3-Series, the Audi A4 and Q5 models and Mercedes’ own C-Class and GLK. In fact, the latter maker has big expectations for the new CLA sedan it will bring to the U.S. in 2014. Smaller than the C-Class, Cannon said it should serve as Mercedes’ new entry point for new luxury buyers.

That said, “If you look at the brands who lack an S-Class competitor, they’re the ones struggling with brand identity,” suggested Dave Sullivan, automotive analyst with AutoPacific, Inc., pointing to Lincoln, Acura and Infiniti.

That’s a reason why the ambitious Hyundai introduced the Equus several years ago – and is updating the premium luxury sedan for 2014. Though the Korean carmaker only expects to sell about 2,000 during the coming model-year, Equus is a critical part of Hyundai’s strategy to reposition itself as a high-value carmaker rather than as an economy brand. Meanwhile, Cadillac is also working on a new model to compete in the premium luxury segment. 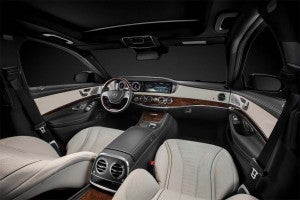 The new S-Class interior gets upgrades including an optional hot-stone-style massager.

“It’s trench warfare,” admitted Mercedes’ Cannon when asked about the increasing competition. But while it may be awhile before sales in the premium segment recover to prior peaks, at least in the U.S. and Europe, he argued that a product like the S-Class remains as important as ever, providing not only a much-needed halo around the Mercedes brand, but also generating solid profits.

Premium models like the S550 also provide a platform for manufacturers to introduce costly new technologies. The big Mercedes remake features an assortment of cameras, radar and sonar sensors it has dubbed “sensor fusion,” and which it claims can provide a 360-degree view of the world around the vehicle. The goal is to significantly reduce the number of accidents the S-Class is involved in – and where a crash is unavoidable, to reduce the likelihood of injuries or death.

Those sensors not only can spot a potential collision, but also allow the S-Class to speed up or slow down with traffic automatically and park with the touch of a button – while the two stereo cameras mounted above the rearview mirror scan the upcoming road surface and instantly adjust the sedan’s suspension to make even the roughest bumps and potholes virtually vanish.

“This segment gives OEMs the ability try new technology before it goes to the masses,” noted Sullivan. “The premium price gets you first in line to try features before anyone else. If they prove to be successful they often filter downstream.”

Mercedes isn’t alone. When BMW re-launched its big 7-Series a few years back it introduced “Cross-Traffic Alert,” a system that watched for traffic approaching from either side when a driver backed out of a parking spot. Within two years, the cost had come down enough to allow Ford to offer the technology with its mainstream Taurus model.

But technology is also transforming the cabin. The 2014 S-Class features an array of infotainment systems, including a WiFi hotspot to turn the vehicle into a rolling office. Then there’s the automatic perfume dispenser and the new massaging seat that can simulate a high-end spa’s hot stone treatment.

That actually underscores another huge change in the luxury market, especially at the premium end. By most estimates, China will become the world’s largest upscale automotive market by 2017, and so far this year, BMW has sold more cars in that booming Asian nation than in the U.S. Mercedes isn’t far behind.

“The challenge is how do we harmonize the differing world demands,” said Mercedes USA’s Canon. In fact, there may be more similarities between the U.S. and China than what American and European motorists desire. The big difference is that Chinese luxury car buyers tend to prefer being chauffeured, so, “We designed the front of the car for the U.S. and the rear for China,” he laughs.

The initial reaction to that approach has been quite positive, and Stephanie Brinley, analyst with IHS Automotive, expects that the new S-Class will help provide the momentum that will not only keep Mercedes at the top of the premium segment but land it back on top in the global luxury sales race after struggling to keep up with BMW and Audi for several years.