The Most Expensive – and Cheapest – States to Get Your Car Repaired

Don't break down in New Jersey. 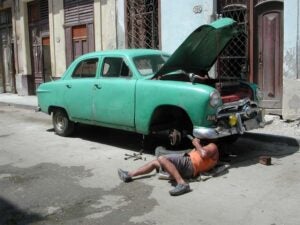 How much does your mechanic charge? It can vary wildly depending upon where you live.

When that “check engine” light come on, there’s a good reason to get worried.  Even if it doesn’t leave you stranded in an unfamiliar part of town after dark it’s likely to take a bite out of your savings, especially as recent studies have indicated automotive repair costs rose by about 10% last year.

That is, of course, an average that varied significantly by region. Indeed, Vermont actually saw repair costs decline last year, according to a new study by automotive service site CarMD, making it America’s  most affordable place to take your car in.  At the other extreme was New Jersey where the typical visit to a service shop cost almost 50% more than in Vermont.

Traditionally, the West Coast is the place where repairs have been most expensive.  But in its latest annual car-repair cost survey, CarMD found only California among the Top Five, the rest of those spots filled by states along the Eastern Seaboard, including not only NJ but North Carolina, Maryland and the District of Columbia.

“In 2012, we saw a dramatic shift in the top five most expensive states for average car repairs, as many drivers along the East Coast incurred rising auto-repair costs, while they simultaneously contended with Hurricane Sandy’s aftermath,” CarMD CEO Ieon Chen noted. “Car owners in many states also continued to put off small repairs, contributing to cumulative failures with increased repair costs.”

Apparently, the “superstorm” was not only the cause of serious, flood-related damage but led many East Coast motorists to discover other problems that needed repairs.

While New Jersey was the most expensive place for repairs – at an average $392.99, including parts and labor, Washington, D.C. saw the biggest overall increase, repair costs jumping 20% compared to 2011

“This is partially attributed to the type of repairs being made,” noted CarMD. “Time-consuming repairs that cost over $1,000 accounted for nearly 10% of D.C. repairs in 2012, as compared with 7% in 2011, while quick-fix, gas cap-related problems were down five points.”

Though repair costs, on the whole, were up last year, there were a few notable exceptions, such as Vermont – and Wyoming, where they fell, on average, by 17%.

Anytime you go to the service shop you’ll wind up having to pay for a mechanic’s time, and Colorado topped the list there, with an average $150.75 per visit. Vermont had the lowest labor cost, on average, at $115.90.

If you needed parts, the survey found that you likely paid a stiff premium in New Jersey, at an average $256.28, compared to Vermont, which had the lowest average, at just $153.82.

The state-by-state gap was especially apparent when it came to new hybrid vehicle technology.  Replacing a battery in Nevada ran an average $4,409.94 last year.  Jersey motorists actually caught a break here, however, with the lowest cost to replace a hybrid battery, on average just $2,005.05.

Incidentally, two of the states with the lowest average repair costs – Iowa and South Dakota – were found in the Midwest while two were located in the South or Southeast, Delaware and West Virginia.