Several options available “at some point.” 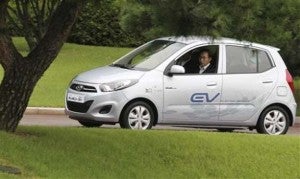 Despite its long reluctance to adopt battery power, Hyundai is apparently getting ready to bring a battery car to the U.S. market its American CEO had revealed.

Exactly what and when remains uncertain, though the maker is already selling a compact battery-electric vehicle, or BEV, called the BlueOn in South Korea. Hyundai Motor America may have no choice but to enter the electric vehicle market, however, if it is to stay on the right side of regulators in the critical California market.

“Our primary zero-emission vehicle focus is fuel cell right now,” tweeted HMA Chief Executive John Krafcik, “but we will certainly field a BEV at some point.”

Hyundai is a relatively late entrant into the growing market for battery-based vehicles which ranges from conventional hybrids to plug-ins to full battery-electric vehicles.  It now offers gas-electric offerings of both its midsize Sonata and compact Elantra models in the U.S.

But it is facing pressure to go even further.  In the U.S., for example, California will mandate that all major manufacturers include some form of ZEV, or Zero-Emissions Vehicle, in their line-ups.  Among those already fitting the bill are the Nissan Leaf, the Ford Focus EV, the Tesla Model S, the new Chevrolet Spark EV, Honda’s Fit EV and the Toyota RAV4-EV.

Until now, Hyundai has indicated it would try to meet the mandate with a fuel-cell vehicle. Fuel cells combine hydrogen and oxygen to create current that can power electric motors – one reason they have been referred to as “refillable batteries.”

The maker began selling a hydrogen-powered version of its little ix35 model in Europe this week and is working on a fuel-cell-powered Tucson crossover, as well. But while hydrogen can be quickly refilled, eliminating the so-called “range anxiety” associated with battery cars, there are few places to get hydrogen, something likely to seriously limit its consumer appeal.

And that could be a factor forcing Hyundai to go with a battery car.

Of course, battery cars have their own limitations, and not just range limitations.  They are expensive to build and even though manufacturers have been charging steep premiums, they are generally absorbing a lot more of the added cost. Fiat/Chrysler CEO Sergio Marchionne has said his company expects to lose about $10,000 on every Fiat 500e it sells in California.

That’s one reason why only a rare few of the current BEV models, notably the Nissan Leaf and Tesla Model S, are offered nationwide.  Most others, like the Toyota, Honda and Chevy battery cars, are primarily limited to California and possibly a few other markets that are copying the Golden State’s ZEV rules.

Whether Hyundai will focus on what critics dub a “compliance car,” or go nationwide remains to be seen.

The maker is already selling its compact BlueOn battery car in Korea and could make it available for the U.S. market relatively easily. The Korean version has a range of just under 90 miles per charge and a top speed of around 80 mph.  Powered by a 16.4-kilowatt/hour lithium polymer battery, it can launch from 0 to 60 in 13.1 seconds.

A prototype version, based on the Hyundai i10, was first shown at the Frankfurt Motor Show in 2009, with production beginning late last year.

While it might seem most likely for Hyundai to bring BlueOn over to the States, the range and performance numbers would put it somewhat in the back of the pack, along the lines of the slow-selling Mitsubishi i-MiEV. So, several observers contacted by TheDetroitBureau.com suggested they’d not be surprised if Hyundai took a different approach.

That could mean boosting the BlueOn’s performance or shifting to another model.  For now, Krafcik isn’t saying specifically what’s in store.  Nor is it clear when Hyundai’s first battery-car offering will become available.