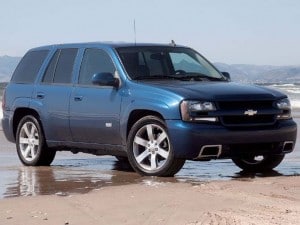 General Motors is recalling another 230,000 midsize SUVs due to a potential fire risk serious enough that the maker also is advising owners to park outside until repairs can be made.

The recall expands upon an action GM took last August – that time covering about 250,000 vehicles, including the Chevrolet Trailblazer and GMC Envoy – sold in 20 Snowbelt states. Similar recalls have impacted several other manufacturers, including Toyota, and have so far involved more than 1 million vehicles sold in North America alone.

The problem involves a master power door and window module located in the driver’s door.  Over time, moisture can leak in and corrode electrical connections.  If that happens, the module can short circuit and overheat. In turn, that can lead to the smell of smoke or, in some instances, a fire.

According to one report, there may have been as many as 58 fires associated with the defective door module involving GM vehicles.

The new recall covers an additional 193,000 of the SUVs sold in the U.S. and another 38,000 sold in Canada, Mexico and other parts of the world.

Vehicles covered by the recall include:

“A short in the circuit board could lead to a fire, increasing the risk of personal injury,” noted a GM statement outlining the latest recall. “A fire could occur even while the vehicle is not in use. As a precaution, owners are advised to park outside until the remedy has been made.”

The maker plans to notify owners directly and says it will either apply a moisture protection coating on the switch module or, if needed, replace the component.  Repairs will be made at no cost to owners.

A number of other manufacturers have experienced similar problems with defective window switch control modules – largely due to the common practice of sharing parts suppliers.