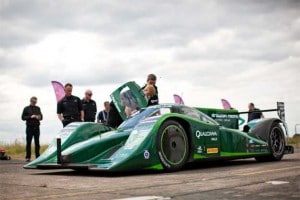 With all the emphasis on electric propulsion these days, it might seem hard to believe that it’s been 39 years since General Electric – yes, GE – set the FIA World Electric Land Speed Record. But that achievement has finally been bested by a sleek, green Le Mans Prototype dubbed “Lola.”

On an RAF airbase in Yorkshire, England, an 850-horsepower battery-electric vehicle built by Drayson Racing hit a top speed of 204.185 miles per hour during a pair of runs down a 3-kilometer (nearly 2-mile) track.  That was a full 29 mph faster than the 175 mph record set way back in 1974 by the Battery Box General Electric.

“I’m delighted we’ve beaten the record tonight and can show the world EVs can be fast and reliable,” said Lord Paul Drayson, whose firm built the 2,200 battery car, and who personally piloted it during the record run. “It is not the outright speed of 204.185 mph that is most impressive about this record, but the engineering challenge of accelerating a 1000 kilogram electric vehicle on a short runway over a measured mile.”

The Drayson LMP racer on its way to topping a 39-year-old record.

Officially known as the Drayson B12 69/EV the enclosed racer used ultra-light carbon fiber for its chassis and body to compensate for the heft of a 30 kilowatt-hour battery pack.  It also relied on custom-designed Michelin LM P1 tires.

Though most folks likely associate electric propulsion with fuel-efficient – but slow – vehicles like the Nissan Leaf or Chevrolet Volt, the reality is that battery power can also deliver some impressive performance as an electric motor yields maximum torque the moment it starts spinning.

Drayson’s Lola can launch from 0 to 60 in less than 4 seconds, for example, and keep gaining speed until it’s pushed well past 200 mph.  In fact, Lord Drayson is apparently looking to soon beat his own record, tweeting to fans that on an additional run the car was “very lively at 216 mph.” 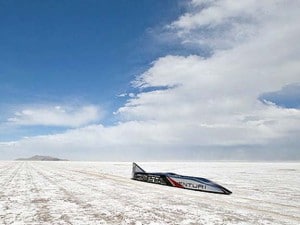 While he may be celebrating victory, the claimed record could come under dispute.  The Buckeye Bullet, an EV built by students at Ohio State University, actually achieved a 307.7 mph average during two runs at the Bonneville Salt Flats in Utah in August 2010 – and was seen as capable of reaching 400 mph. But that effort was not officially sanctioned by the FIA, leaving GE’s Battery Box the certified record-holder for another three years.

To proponents, what matters most is the increasing focus in electric racing and battery propulsion, in general.

There’s clearly a lot more interest. Nissan, for example, has nudged its ZEOD RC battery race car up to 186 mph, and Top EV Racing claims to have launched its battery dragster from 0 to 100 in a mind-boggling 0.8 seconds.

What could put battery racing square in the public eye is the new Formula E series set to launch in 2015.  Not surprisingly, Lord Drayson is looking to participate when that program gets underway.