Sales of premium models expected to double by 2020. 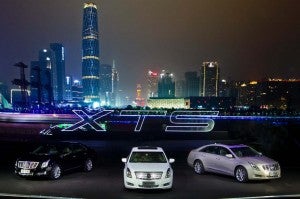 The new Cadillac XTS gets a splashy launch during China's annual auto show.

It would be tempting to say that James Wang is living the American dream – if it weren’t for the fact that he’s living in Beijing.

The mild-mannered 27-year-old is a self-made mega-millionaire, earning his money building golf courses for the country’s fast-growing leisure class. And like so many of his American counterparts, the young entrepreneur is addicted to automobiles, with a fleet of vehicles ranging from a Subaru WRX STi to a Porsche 911 and even a Maybach M62 in his garage.

While Wang may have a slightly larger personal fleet than most Chinese motorists he’s far from unusual in his taste for premium automobiles.  Luxury cars today fill the streets of many booming Chinese cities, notes Fu Qiang, president and CEO of Volvo Cars China, noting that “All the forecasts call for China to become the world’s largest premium market by 2016.”

The country is already the largest national automotive market in the world, pushing past the U.S. several years ago. And Chinese industry groups have estimated overall annual demand could surge to 38 million in little more than a decade, exceeding sales in the U.S. and the European Union combined.

Chinese luxury car sales have been growing even faster than demand for mainstream products, and while the pace may slow down a bit in the coming years, it won’t be by much, according to Michael Dunne, one of the leading experts on the Chinese market.

China’s increasingly affluent consumers are expected to purchase 1.4 million vehicles priced above $50,000 this year, says Dunne, a leading analyst and author who has followed the country’s automotive industry for more than two decades.  By 2017, sales should surge to 2.6 million – topping the U.S. – with demand likely to reach 3.0 million in 2020, Dunne forecasts.

It’s no wonder, he adds, that every major premium auto manufacturer has staked out a presence in China, from struggling Lincoln to Volkswagen’s fast-growing Audi.

In fact, what Dunne describes as “the brewing battle” for dominance in the Chinese luxury car market pits the three major German makers against virtually everyone else. Together, Audi, BMW and Mercedes-Benz currently control almost 80% of the Chinese premium car market, with “a whole gaggle of challengers” struggling to unseat them.

That includes fifth-ranked Volvo which is readying two new Chinese assembly plants, one just ramping up production, a second set to go into operation by late 2014.  They will be critical to the maker’s ambitious goal of boosting sales from just 41,989 last year to 200,000 by late in the decade.

While some makers can get away with imports, creating a cache of exclusivity around products like the made-in-Europe Porsche Cayenne, hefty duties and other costs typically double the price of an imported luxury vehicle, severely limiting demand.

Volvo is far from the only premium automaker to recognize that conundrum.  A growing list of luxury makers can be found setting up production plans, including Japan’s Infiniti, Germany’s Porsche and Detroit-based Lincoln and Cadillac, the latter just launching the big XTS model at parent General Motors’ plant in Shanghai.

Like many makers, Caddy has learned that local production alone won’t open up a place in the Chinese market, however.  While the luxury cars popular in China closely resemble the sort of vehicles that Americans prefer, there are some differences.

A large percentage of Chinese buyers prefer to be chauffeured, for one thing, which means they’re likely to ride in the back seat – and they usually demand extra legroom and duplicate controls for the climate controls and infotainment systems. Makers like Audi, BMW and Volvo have responded with special Chinese models such as the Swedish maker’s long-wheelbase S80L.

For the moment, China’s economic boom remains concentrated in larger cities along the Pacific Coast, such as Beijing and Shanghai. But the financial spoils are beginning to spread out to places like Chengdu, a three-hour flight to the west, and makers are now laying out strategies to go after smaller, so-called Tier III, IV and V communities, “cities with a lot of potential,” according to Volvo’s Fu.

If those cities come even close to the level of luxury car demand seen in Shanghai or Beijing, experts say, the numbers forecast for 2020 could be just the beginning, Chinese premium car sales potentially matching much of the rest of the world combined.