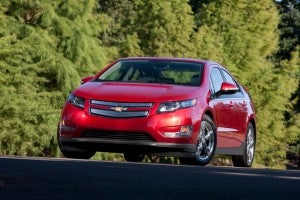 A glitch affecting the stability control system of a handful of 2012 Volts triggers a recall.

There’s been some major recalls during the past year, Chrysler agreeing, just this month to fix about 1.5 million Jeeps due to potential fire risks.  And there’ve been small ones measuring barely into the triple digits, such as the 689 Aston Martins that must be fixed because their brake pedals can, well, break.

But an admittedly incomplete search of the records suggests that this week’s recall of the Chevrolet Volt may set an all-time record.  Marking the first time General Motors’ much-ballyhooed extended-range electric vehicle has been subject to such an action, a grand total of just four vehicles are on the target list for repairs.

The problem, it appears, involves an electronic glitch with the electronic stability control system on the four vehicles, all sold during the 2012 model-year. In an emergency braking situation, the issue could lead to a crash – though GM says it is unaware of any incidents involving the vehicles.

The issue, according to the maker, “was discovered in a returned warranty part of an exported Volt and led to an investigation that discovered four other vehicles that had been manufactured with a defective brake pressure modulator valve.”

The automaker adds that it has already begun contacting owners of the four vehicles directly, but under federal law it also will send out a formal recall letter within the next two weeks to ensure the customers get their vehicles repaired.

It’s not clear why only four of the battery-cars were impacted by the problem.  Typically, such problems with a component can impact large numbers of vehicles until the issue is discovered – often as happened with the defective Volts, when owners bring a product in for repair, while other recalls are triggered when federal safety regulators began to detect a pattern in complaints filed by consumers.

Of course, sales of the Chevrolet Volt have not exactly been on a par with some of the other vehicles facing recall in recent months.  Though volume tripled between 2012 and 2011, demand came to a grand total of 23,461 of the plug-in hybrids last year.  And the maker has been struggling to maintain that pace in 2013 by cutting prices.

(For more on the recent price cut on the Chevrolet Volt, Click Here.)

By comparison, a defect with a single common power window master control switch mounted in the driver’s door on a wide range of Toyota products has led that maker to recall millions of vehicles sold around the world.  A shared airbag component built by supplier Takata has also resulted in millions of vehicles being recalled by a number of makers, including Toyota, Honda and Nissan.

(Value of used battery cars on the decline. Click Here for more.)

The Chevrolet Volt itself isn’t entirely immune to more widespread issues, however. And though this week’s first-ever recall might be considered miniscule, it has had to address several other issues in the past with what are commonly deemed “service actions,” or “customer satisfaction campaigns” that fall just short of the legal definition of a recall.

One, announced last October, involved a software patch meant to address a problem that could cause as many as 4,000 Volt plug-ins to lose power unexpectedly while being driven.  The problem involved a feature that let owners set a specific time for the batteries to be recharged – typically to access lower, overnight electric rates. But for a small number of Volts, the feature could also result in the car’s electric motor unexpectedly shutting off while in motion.

Another issue cropped up following the report of several fires during or after crash testing by the National Highway Traffic Safety Administration.  Though the problem was eventually traced to errors in testing by NHTSA, GM responded to the headlines by coming up with a structure to increase the protection of a Volt’s battery pack in the event of a crash. In January 2012, it also offered to retrofit 8,000 previously sold Volts.

Such safety campaigns typically require a less aggressive effort to reach consumers and ensure they get their vehicles repaired.  Makers also aren’t subject to the same strict rules requiring them to report the number of vehicles that eventually are repaired.

Typically, even the most serious recalls see only a fraction of owners come in for repairs, a 70% completion rate generally considered a success, according to the industry.