From Track to Street, How Motorsports Improves What We Drive 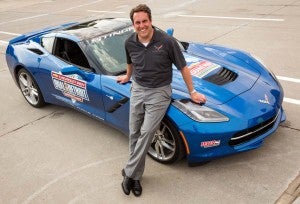 GM President Mark Reuss with the Corvette pace car he'll be riding in during the IndyCar race on Detroit's Belle Isle.

When the field of IndyCars lines up on the grid at Detroit’s Belle Isle race track this Sunday, you can be guaranteed that General Motors will lead the pack. That’s because Mark Reuss, GM’s President of North America, will be riding in the pace car, a Chevrolet Corvette Stingray.

There’s no way to know who’ll ultimately take the checkered flag but Reuss and GM clearly hope for a repeat of last week’s Indy 500, the maker’s Chevrolet division powering to a 1-2-3 victory, the first time Chevy has won the celebrated race in 11 years.

That victory has a number of benefits, according to Reuss. “We’re a company that lost what it feels like to win,” he says, recalling with a grimace the bankruptcy that nearly shut GM down just four years ago. But wins like Indy are “giving us a feel of what it’s like to win again as a company.”

There are other payoffs, the executive says.

Take the Corvette.  Some of the most significant advancements on the new 2014 model – known to fans as the C7 – can directly be traced to the General Motors racing program, from the way the sports car’s 450-horsepower V-8 works to the carbon fiber panels used to reduce its weight and lower its center of gravity.

“Motorsports play a key role for us in improving our street cars and powertrains,” explains Jim Campbell, head of the Detroit maker’s well-funded motorsports program.

And GM isn’t alone.  Most auto manufacturers participate in racing programs, from short track sprints to endurance races like the legendary 24 Hours of Le Mans.  They’re even backing new “green” racing events, including one loosely affiliated with Formula One, that proponents say could yield significant improvements in battery-car technology.

The auto industry has been actively involved in racing since the earliest days of the automobile. In fact, Henry Ford got backers to finance his company after winning a race in one of his prototypes. The Chevrolet brand, meanwhile, was original created by racer Louis Chevrolet.

And ever since, contends Campbell, a former Chevy general manager, the brand and its sibling GM divisions have counted on racing to “improve the breed.”

The Corvette is a great example.  Its 6.2-liter V-8 uses direct injection to achieve the seemingly contradictory needs of increasing power while also boosting fuel economy. GM first tried DI technology on the track.  The same is true for the super-strong and ultra-light carbon fiber panels used for the Stingray’s roof and hood.

“It’s all about technology transfer,” GM’s racing chief explains. But he quickly adds another benefit. “It’s also a great place to train our engineers in an environment that’s very demanding and very fast paced.”

Where an automaker might take years to find ways to boost the performance of a new engine sold to consumers, it may have just days to achieve the same results if it hopes to stay competitive on the track.

Of course, there’s yet another advantage to a successful program. The old industry adage is “Win on Sunday, Sell on Monday.” But industry marketers have been trying to do even better, using social media and other efforts to draw race fans into showrooms every day of the week.

Mazda is betting that its new endurance racing program will both focus attention on its new SkyActiv-D diesel engine – and reveal ways to improve the technology which will be introduced in a street version of the new Mazda6 for 2014.

While it might seem obvious that high-performance vehicles like the Corvette might benefit from racing’s technology transfer, motorsports can improve even more mundane vehicles like the Chevrolet Equinox crossover, or the Ford Fusion sedan and Toyota Avalon.

Industry engineers say that many of the latest developments in basic powertrain technology – especially with higher-performance turbochargers – can be considered “track tested.”

Formula One’s intense focus on aerodynamics has helped the industry learn a lot about cheating the wind to radically improve fuel economy.

And many of the technologies that have made racing much safer over the decades have been transferred to street cars, suggested Richard Cregan, former manager of Toyota’s huge Formula One program and now the head of the Yas Marina F1 circuit in Dubai.

Nissan recently announced plans to ramp up production of its special, high-performance NISMO models, including a version of its GT-R sports car. “It’s too early to share any details yet, but fans can be certain we’ll be applying all of our motorsport expertise to creating a GT-R NISMO worthy of the name,” said Shoichi Miyatani President of NISMO which is, incidentally, shorthand for Nissan Motorsport International Limited.

There are critics who question the benefits of racing, fearing that it simply encourages the focus on high-performance, fossil fuel-powered vehicles.  But racing could soon be helping develop better “green machines,” as well.

The Formula E series is planning to debut next year with a field of 10 cars in 10 different races, all based in urban centers such as London.

“The fact that we will only race in city centers highlights the main message of our Championship: the electric car as a solution for mobility in cities of the future,” explained Alejandro Agag, CEO of Formula E Holdings, adding that the demands of the track could help yield significant improvements in battery powertrain technology.

“I think there’s life beyond NASCAR and Formula One,” suggests Herb Fishel, who retired a few years ago as GM’s motorsports chief and is now involved in green motorsports efforts, “and it will come as we see new forms of racing evolve.”