Honda trims lease on Fit EV by a third. 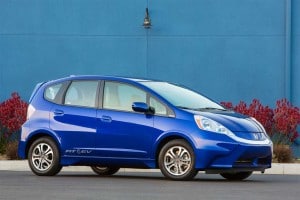 Honda will trim the price of its Fit EV by a third.

Honda will slash by a third the cost of leasing its new Fit EV making it the latest maker to try to boost demand for battery cars by reducing their hefty price premium.

Other makers who have already taken steps to improve the affordability of their electric vehicles include Nissan with the battery-electric Leaf, and Chevrolet with the plug-in Volt. High prices are one of the key reasons potential buyers have steered clear from so-called advanced propulsion vehicles, according to industry research.

Honda says it will reduce the price of the Fit EV lease from $389 to $259 a month, and customers will no longer face mileage limitations.  Existing customers will see their lease prices adjusted, as well.

Price cuts have helped boost sales of the Nissan Leaf in recent months.

“The Fit EV already is a benchmark electric vehicle with a leading-range rating, fun-to-drive dynamics and excellent packaging,” said Steve Center, vice president of environmental business development for American Honda Motor Co., in a statement. “Now it’s the only EV on the market with no down payment, unlimited mileage, collision coverage and a free home charging station, giving customers an unprecedented value that only Honda can provide and a compelling reason to get off the barrel and onto the grid.”

Battery car sales were expected to show significant growth as new models began coming to market over the last three years, but demand has lagged well behind expectation and few expect the Obama Administration will see its goal of having 100,000 plug-based vehicles on the road by the end of 2014. All told, plug-in hybrids and pure battery-electric vehicles still account for less than 0.5% of all new vehicle sales in the U.S. – though the figure grows to around 3% if conventional hybrids are included.

Part of the problem is that while more battery-based vehicles are coming to market, many of them are limited in their distribution.  The new Chevrolet Spark, for example, will initially be sold only in California and Oregon.  Honda currently distributes the Fit EV in California, Oregon, New York, New Jersey, Massachusetts, Maryland, Rhode Island and Connecticut – though it plans to enter 28 more states by the end of next month.

Skeptics contend that many of the new, batter-based vehicles are simply “compliance cars,” designed to meet the strict new Zero-Emission Vehicle, or ZEV, mandates enacted by California regulators. A number of other states have adopted those rules. Without offering a vehicle like the Fit EV, Honda would soon be barred from selling any products in California.

Company officials insist they have a real interest in electric propulsion – a position echoed by most other makers, though Chrysler has made it clear it would prefer not to be in the battery car business. That Detroit maker has acknowledged it expects to lose about $10,000 on every Fiat 500e battery car it sells.

Most makers also expect to lose money, at least initially, on their electric vehicle programs.  That includes both General Motors and Nissan – initially. But both of those companies insist they see real potential for their battery-car programs.  Nissan, in fact, plans to expand its line-up of offerings with a plug-based Infiniti model next year. GM’s Cadillac will add ELR, an upscale version of the Chevy Volt, in 2014.

But the two makers have had to respond to market concerns about battery-car pricing. Chevrolet shaved several thousand dollars off the Volt’s sticker last year, and Nissan has not only taken a similar move with the Leaf but also introduced a stripped-down version of the Leaf that has helped deliver a significant bump in sales since January.

It also helped Nissan to begin producing the Leaf and its batteries at the maker’s sprawling assembly complex in Smyrna, Tennessee.

While price has been a particular obstacle to expanded battery-car sales, other issues include concerns about battery life and battery range.

Start-up Tesla Motors recently announced a no-fault battery warranty program to allay one of those issues. It is expected to announce a broadened “Supercharger” program later today. That’s the name the maker has given to the high-speed chargers it plans to set up along major roadways along both the East and West Coasts.

Tesla CEO Elon Musk has said, however, that the likely big jump in sales for the maker will require the introduction of a new mainstream model likely to cost $50,000 or less. That would be as little as half of what Tesla currently charges for the Model S sedan.