No-helmet laws catch blame, but so does weather. 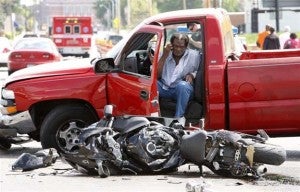 Motorcycle deaths rose 9% last year, according to new data from the Governors Highway Safety Administration – marking the 14th time out of the last 15 years that there has been a rise in fatalities.

All told, about 5,000 Americans were killed in motorcycle crashes in last year, a nearly 240% increase from 1997, even though overall traffic fatalities have dropped by nearly a quarter during the same time period.

“This is a bad situation that is getting worse,” said Jonathan Adkins, GHSA’s deputy executive director.

Adkins is one of many pointing the finger at the ongoing, state-by-state repeal of helmet laws.  In Michigan, a state police report found that motorcycle deaths surged 18% during 2012 – the year lawmakers repealed the state’s helmet requirement. By comparison, overall traffic deaths increased a more modest 5.3%.

The number of Michigan riders killed without a helmet went from five in 2011 to 55 last year, according to the police report, while a study by the University of Michigan indicated 26 of those riders would likely have survived had they been wearing helmets.

National Highway Traffic Safety Administration Direction David Strickland has warned that “every state” that has repealed its helmet laws has seen a sharp increase in fatalities. The agency reported that in 2008, 822 riders would have survived had they worn helmets – while also estimated another 1,829 motorcyclists survived crashes by wearing helmets.

NHTSA estimates motorcyclists are 37 times more likely to die in a crash than a person riding in a passenger car. It also claims helmets are as much as 41% effective in preventing motorcycle crash fatalities.

The advocacy group, ABATE, has tried to counter such arguments by claiming the 2012 surge in fatalities was due to warmer than normal weather that had motorcyclists out on the roads earlier and longer.  That does not, however, explain why fatalities have risen during 14 of the past 15 years.

Proponents of helmet law repeal have also noted an increase in the number of licensed riders, as well as those riding without a license – or training.

ABATE and other groups have taken advantage of the rising number of Republican-controlled and conservative legislatures to reduce the number of states maintaining helmet laws from 26 in 1997 to just 19 today.

Experts warn motorcyclists to wear helmets even where not required by law. They also note that drinking and riding is particularly risky, 42% of all motorcyclists killed in crashes having a blood alcohol level of over 0.08% — which would qualify as DUI in most of the country.

Meanwhile, motorcycle manufacturers are being encouraged to add new safety features. According to Consumer Reports, bikes equipped with anti-lock brake technology have a 37% lower chance of being involved in a fatal crash.