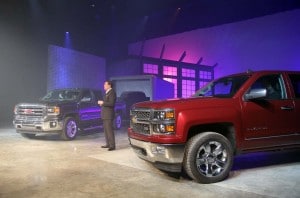 General Motors is counting down for the launch of two all-new midsize pickups which will likely reach showrooms in time for the 2015 model-year.

GM hopes to buck the industry trend that has seen a sharp decline in demand for small trucks in recent years – and led both Chrysler and Ford to abandon the once lucrative market segment. The maker intends to target buyers who want something sportier and more fuel-efficient than current full-size offerings like the Chevrolet Silverado, said Mark Reuss, president of GM’s North American operations.

But Reuss also promised that the smaller pickups will maintain most of the capabilities of their full-size siblings.

It remains to be seen what names the two new models will get.  There’s a good chance GM planners will opt for something entirely new rather than picking up the Chevrolet and GMC nameplates the maker stopped producing last year.

“Don’t think of them as (Chevrolet) Canyon and (GMC) Colorado replacements because they’re not,” said Reuss, during an industry breakfast marking the start of the annual Society of Automotive Engineers conference in Detroit. “We’re researching the names as we do any new products to see where the legacy names are, do they mean something to people.”

That would suggest GM is quote open to using entirely new names that would give the company the chance to completely reposition the new trucks. Without competition from Ford and Chrysler, the all-new Chevy and GMC offerings would have a cleaner shot at the Japanese imports that now dominate the segment, the Toyota Tacoma and Nissan Frontier.

Just how much of a market there will be for the Chevy and GMC offerings remain to be seen. Clearly, its cross-town rivals don’t see much of an opportunity. But GM planners are convinced that if they can deliver solid products that are not only fuel efficient but highly capable it will draw new buyers into a segment that, a few decades ago, actually outsold full-size trucks.

Critically, Reuss promised that there will be far more differentiation between the Chevrolet and GMC models than ever before. That extends to not only their basic design but also the way they will be marketed.

“We’re going to really target different buyers with these two trucks,” the executive explained. “We’d love to have a truck like a Chevrolet…attack the West Coast with a lifestyle truck that is really beautiful and fun. It’s a different positioning than a semi-serious duty cycle truck that we might do with a GMC Canyon.”

For now, GM officials are remaining mum on specific details, though Reuss let slip a diesel option just might be in the works — something reportedly also in development for the Chevy and GMC full-size truck lines.

The new midsize trucks will be assembled at GM’s Wentzville (Missouri) Assembly Plant now that the old midsize line in Shreveport, Louisiana has been closed.

Reuss hinted that GM will pull the covers off the new models this coming autumn – which would strongly suggest a formal introduction at the Los Angeles Auto Show. They’re expected to go on sale by mid-2014, less than a year after the launch of the re-designed Chevrolet Silverado and GMC Sierra full-size pickups.

The four new trucks are among 29 new or significantly updated cars, trucks and crossovers GM plans to introduce in North American this year and next.  Returning to the market with the midsize trucks, while also updating the full-size models, could prove particularly critical if GM is to achieve its goal of regaining the market share it has lost over the last several years.