“Should have never happened,” maker says of Indian ad campaign. 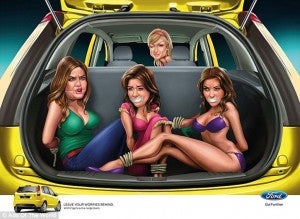 One of the Ford India ads shows a caricature of Pari Hilton with the three Kardashian sisters bound and gagged inside a Figo.

Ford Motor Co. is taking heat for a series of ads it released in India showing caricatures of several celebrities behind the wheel of a Ford car with three women bound and gagged in the cargo bay.

With critics declaring the campaign offensive and misogynistic, Ford and its global ad agency WPP have quickly backtracked, apologizing and admitting the campaign “should never have happened.”

In one of the three, released to the website Ads of the World, a caricature of Paris Hilton is shown winking from behind the wheel of a Ford Figo with the three Kardashian sisters bound and gagged in the cargo compartment of the hatchback.

Another ad uses a satirical image of Italy’s former Prime Minister Silvio Berlusconi driving with three other scantily clad women bound and gagged. Meanwhile, a third ad for the Figo puts Formula One driving champ Michael Schumacher behind the wheel. This time, however, three of his long-time rivals, Sebastian Vettel, Lewis Hamilton and Fernando Alonso, are held captive. 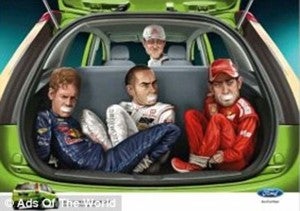 The WPP campaign appears to have been designed to show the large cargo capacity of the small Figo, a car Ford has hoped will help it gain a large share of the booming Indian automotive market.

“We deeply regret this incident and agree with our agency partners that it should have never happened,” Ford said in a statement responding to a wave of protest. “The posters are contrary to the standards of professionalism and decency within Ford and our agency partners.”

For its part, WPP added that the ads “were distasteful and contrary to the standards of professionalism and decency.” The agency’s statement hinted that the three ads were originally created for in-house use and,” were never intended for paid publication and should never have been created, let alone uploaded to the internet.”

Whether intentionally used in public or not, the campaign is particularly unusual considering Ford has traditional erred on the side of caution to avoid generating controversy with its advertising. The maker responded to a conservative protest campaign a few years ago by pulling its advertising from an assortment of gay, lesbian and bisexual publications – though Ford later decided to resume that campaign.

It’s unclear what impact the ads – and the apology – will have on sales in India where the Figo has been gaining significant traffic since its launch in 2011. Ford has invested  about $1 billion in that market since then, the Figo anchoring the roll-out of eight new models.

Ironically, the controversy could generate more interest in the Ford line at a time when sexual predation has become an issue of national concern in India. Several high-profile gang rapes, including one earlier this month targeting a Swiss tourist, led the Indian Parliament last week to approve a new anti-rape law.