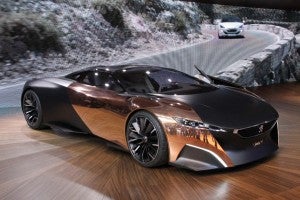 Peugeot's Onyx Concept at the Paris Motor Show. The maker is hoping to rebuild demand with new product.

Hammered by plunging sales and massive excess capacity, struggling PSA Peugeot Citroen has revealed it lost €5.01 billion, or $6.74 billion, last year raising further concerns about its long-term health – and about the viability of a partnership the French automaker has formed with General Motors aimed at turning around both of their troubled European operations.

The heavy loss – compared with a €588 million profit for 2011 — is compounding concerns that the French government might move to take a stake in Peugeot, the country’s dominant automaker. The new Socialist administration is already on the hook for a €7 billion guarantee it approved last year for the car company’s financial services arm.

European car sales have continued plunging as Continental bureaucrats struggle to solve a nagging financial crisis, hitting their lowest level since 1995 last year. Most makers have taken a hit, some slipping deeply into the red, but none as sharply as Peugeot.  Compounding the maker’s problems has been a significant increase in steel and other raw materials and components.

The loss “reflects the deteriorated environment in the automotive sector in Europe,” explained PSA Peugeot Citroen Chief Executive Philippe Varin.  However, the executive attempted to put a positive spin on the situation, asserting the maker has gotten through the worst and that, “The foundations for our rebound have been laid.”

The 2012 loss included a €4.13 billion financial charge announced earlier this month and is part of a broad turnaround plan announced by the maker responsible for two-thirds of the vehicles produced in France. The maker has been burning through cash at a rate of €200 million a month but hopes to halt that hemorrhaging by 2014.

That could be difficult, however, if it can’t reverse the sharp decline in sales and other revenues, which plunged by 5.2% last year, to €55.45 billion.  Car sales alone fell 16%, nearly double the overall average in the European market. The automotive division, in particular, went €1.50 billion into the red for 2012, compared with a €92 million loss the year before.

Perhaps triggering increased concerned, French finance minister Pierre Moscovici declared, “I don’t want there to be any panic,” during a radio interview that followed the Peugeot announcement.  The government is in the process of doing “what needed to be done” to help Peugeot, such as the loan guarantees for Banque PSA Finance. But Moscovici also asserted that the Paris-based government has no intention of nationalizing all or part of Peugeot.

With its roots dating back to 1891, PSA Peugeot Citroen is Europe’s second-largest automotive group, after Volkswagen AG, and produced 2.8 million vehicles in 2012. But declining demand led it to announce plans to close a suburban Paris plant last year, and eliminate 8,000 jobs – relatively unheard of steps in Europe.

The maker has also signed on for a joint venture with General Motors, which has also been struggling to reverse the fortunes of its European Opel subsidiary after 13 consecutive years of losses. The two makers hope to consolidate a variety of operations, including some product development, yielding at least $1 billion in savings apiece.

But in the light of Peugeot’s worsening financial situation, many analysts have begun to question whether it can fully enter into such an alliance. Meanwhile, calls have grown for GM to take radical steps of its own, possibly even selling off its Opel subsidiary.