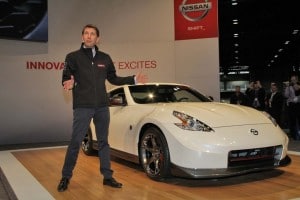 Nissan plans to transform its long-time motorsport arm into an “affordable” performance brand, two new models wearing the Nismo badge making their debut at the Chicago Auto Show this week.

Originally launched in September 1984, its name a shorthand reference to Nissan Motorsport International Limited, Nismo was primarily focused on sports car racing, including Japan’s Formula 3 series.  Until now, only a handful of vehicles were built for road use, but that’s about to change, according to Nissan’s global marketing and communications chief Simon Sproule.

The two offerings on display at Chicago’s McCormick Place include the Juke Nismo, a sporty version of Nissan’s little crossover, and an update of the 370Z Nismo, the 2-seat sports car until now being one of the few production Nissan models to get the Nismo treatment.  And there will be more to come, according to Sproule.

“This represents an exciting new growth opportunity for the Nissan brand,” he said during an interview at the Chicago Auto Show. 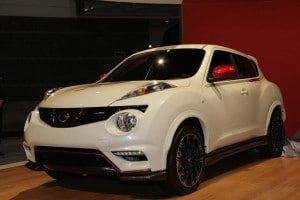 The Nismo take on the Nissan Juke.

Sproule readily acknowledges that Nissan has been enviously eyeing the success of the various German performance sub-brands, such as Mercedes-Benz’s AMG and the M- line from BMW.

“They have done a better job at this,” he said, adding that while Nissan has a “rich and credible history with performance vehicles,” that has “never been fully exploited.”

Now, Nissan hopes to change that.  And it’s betting the payoff will be twofold.  First, it will help put a halo around the entire Nissan brand, Sproule believes. But it will also boost the bottom line since products like the BMW M3 and Mercedes E63 AMG have shown that performance-oriented consumers are willing to pay a steep premium for these niche models.

That said, Nissan doesn’t plan to completely duplicate the German model.  Rather than targeting only the most affluent buyers, the new Nismo is envisioned as a “very democratic performance brand,” said Sproule, “good fun that’s also affordable.”

That means it likely won’t deliver quite the performance boost of an AMG model, which can add another 150 to 200 horsepower over a more conventional version of a model like the Mercedes E550.

But for those who want a true fire-breather, Nismo will soon offer multiple “shades of gray.”  There could be one 370Z Nismo, for example, that focuses on performance appearance and adds perhaps 10% more horsepower.  But a more exclusive – and expensive model – will wear the RS badge and could get the same sort of high-performance treatment familiar to BMW M aficionados.

“Absolutely key” to making Nismo work, Sproule cautioned, is “consistency.”  A number of other mainstream automakers have tried to come up with performance sub-brands.  But they’ve seldom maintained focus and authenticity, he argued.

Nissan itself has been struggling to come up with a consistent strategy for IPL, the performance sub-brand of its upscale Infiniti marque. While some IPL models deliver measurable improvements in performance, others add little more than sporty trim.

“IPL is a work in progress,” Sproule concedes, hinting that a more consistent strategy for that sub-brand is being developed. And it could take shape as Infiniti expands its ties to the Red Bull Formula One racing team. Specific details are “TBD,” the executive says, though he confirms that the Red Bull alliance “enables us to commit to more projects” for IPL.