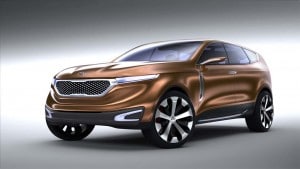 The Kia Cross GT Concept hints at future plans for the Korean automaker.

Kia is the latest maker hoping to “blur the lines” between a luxury sedan and a three-row crossover with the new Cross GT Concept it has unveiled at the Chicago Auto Show.

It brings to mind the size gap between the 2- and 3-row versions of the Santa Fe launched this year by sibling maker Hyundai – but with more upscale accoutrements.

“The debut of the GT in 2011 heralded a new frontier for Kia, both from a design and a business perspective,” noted Peter Schreyer, Kia Motors Corporation president and global chief of design.  “It beautifully illustrated to the world that the brand was ready to explore the possibility of perhaps one day offering a full-size rear-drive luxury saloon.  The Cross GT, with its raised stance and large cargo area, allows us to envision the GT in the form of a full-size luxury crossover.” 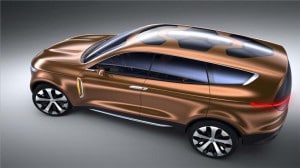 The plug-in hybrid Cross GT concept is longer, wider -- but lower -- than the current Kia Sorento.

The maker suggests that the Cross GT reveals the familiar Kia Tiger-Nose styling cues can be seen “morphing into a mischievous yet friendly grille and headlight arrangement, coupled with strong styling lines that exude speed and energy from every angle.”

The shape of the concept vehicle was penned in Frankfurt, Germany, but it was strongly influenced by the Kia Design Center in Irvine, California, the same studio that crafted the popular Track’ster concept and the 2014 Forte sedan.

Among the more striking features, the Cross GT used dual rear-hinged, or “suicide” doors to improve access to the rear bucket seats. The cargo compartment adopts an unusual clamshell design. And there’s a multi-panel skylight with hexagonal glass inserts to add both a distinctive look and bring plenty of light into the cabin.

The interior is more upscale than the current Sorento crossover and uses a variety of natural materials, including Almond-Terra-colored leather seating, and re-harvested American walnut accents. Kia claims the materials rely on vegetable oil dyes and no chemicals. Key features, including the climate system, telematics and entertainment are all operated by the central touchscreen and a mouse control device.

Rear passengers get their own Internet and infotainment options, with flat panel screens mounted in the front headrests. There’s also a large storage compartment tucked into the load floor behind the rear seats.

The Kia Cross GT shares “the same bloodline,” the maker suggests, with the Sorento crossover, though its 122.0-inch wheelbase is 15.7 inches longer than the production CUV, and at 192.8 inches total length it adds 8.4 inches. The concept is 4.9pinches wider, meanwhile, at 79.1 inches, though it is also 1.6 inches lower than the Sorento, at 65.3 inches.

The new Kia Cross GT Concept is powered by a 3.8-liter V-6 hybrid pairing the gas and electric power sources through an 8-speed automatic, and it features torque vectoring to improve cornering capabilities. Total output is 400 horsepower and 500 lb-ft of torque.

The plug-in system, meanwhile, delivers up to 20 miles range on electric power alone.

Asked how much of the Cross GT is likely to make the jump from concept to production, Kia’s marketing chief Michael Sprague suggested that the Korean carmaker’s customers want to see the brand move even more upmarket.

“The Cross GT is the next logical step in that evolution,” said Sprague.  “And while only a concept today, it signals one possible design direction we may explore for the future.”