Will Nissan Buyers Scent Something New? 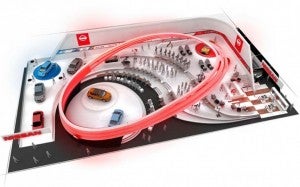 Automakers love to talk about “halo” cars, like the 2014 Corvette Chevrolet plans to unveil at next week’s North American International Auto Show. But Nissan plans to put a halo around the brand itself – or, more precisely, around the Nissan brand’s new exhibit at Detroit’s Cobo Hall.

The Nissan stand may likely be one of the most quirky and distinctive the Detroit Auto Show has seen in some years, featuring a 145-foot long illuminated ring that appears to float above the cars, trucks and crossovers Nissan will be highlighting.

Meanwhile, the maker also hopes to lure show-goers away from the competition, quite literally grabbing them by the nose using what it describes as “special scent” matched by alluring sounds and music.

With an estimated 55 to 60 new products set to debut at the Detroit Auto Show this coming week it’s never easy for a manufacturer to stand out from the competition, and it’s not unusual for a company like Nissan or Toyota – the latter boasting its NAIAS stand will be its largest ever – to spend tens of millions of dollars to create just right the showcase for its newest products. 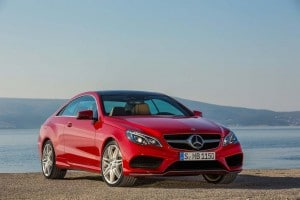 Three versions of the Mercedes-Benz E-Class will debut in Detroit this year.

In Nissan’s case, that includes a new subcompact hatchback expected to replace the old Juke, and the Resonance Concept that will serve as a prototype of the next-generation Murano crossover Nissan will begin building in Mississippi next year.

Detroit itself is putting a halo around its riverfront showcase.  The aging Cobo Hall has been the object of derision for decades but a $279 million investment program promises to spruce things up for the 2013 North American International Auto Show, or NAIAS, as it is formally called.

There’s a massive new atrium commanding a spectacular view of Canada across the Detroit River – and it will serve as the venue for an opening ceremony that includes the much-watched North American Car and Truck of the Year awards.  Six vehicles are vying for two trophies and Ford has the chance to become only the third maker to nab both honors in the same year with its Fusion and C-Max models.

While there’s a good chance he’s right about Cobo, not everyone is so upbeat about the city itself, Detroit teetering on the edge of bankruptcy and likely to soon have an emergency manager appointed by the governor to take over control of the city’s finances.

That said, there are more hotels and restaurants and even tourist attractions operating in the downtown area than there have been in decades, and many of them will be filled in the coming days housing journalists and industry executives or playing host to the numerous auto show afterglow parties.

Even with the new atrium and other added spaces, Cobo Hall is far from the largest auto show in the country.  In terms of both physical size and attendance, it lags well behind the Chicago Auto Show, held only weeks later and less than 300 miles away.

But no American car show comes close to matching the media turnout which, organizers claim, has reached as high as 10,000 in better years – though skeptics insist such figures have routinely been inflated.

Even from a consumer standpoint, the Detroit Auto Show clearly pulls them in, generally in the range of 700,000 potential car buyers. And with the U.S. auto industry on a roll, with last year’s sales jumping about 15%, to 14.5 million, and most observers forecasting demand will surge as high as 15.5 million in 2013, there are ample expectations for a huge turnout.

And show-goers will have a chance to not only look and kick tires. Once again, the 2013 NAIAS will feature a ride-and-drive in the Cobo Hall basement allowing motorists to actually experience some of the newest “green” automotive technologies.

NAIAS press days begin on Monday January 1st. The well-heeled member of the public can attend the gala black tie opening on Friday night, the fifth. The turnstiles keep spinning until the 27th.

Thanks for subscribing! Please check your email for further instructions.
Tagged with: Automakers love to talk about “halo” cars | around the Nissan brand’s new exhibit at Detroit’s Cobo Hall. TheDetroitBureau.com offers a preview of this year's Detroit Auto Show. | auto news | car news | like the 2014 Corvette Chevrolet plans to unveil at next week’s North American International Auto Show. But Nissan plans to put a halo around the brand itself – or | more precisely | paul a. eisenstein | paul eisenstein | thedetroitbureau