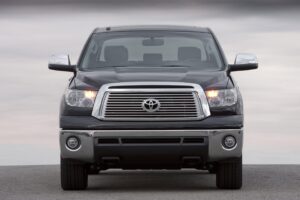 Don't be surprised to see Toyota take a more conservative approach to styling than with this, the current version of its Tundra pickup.

One thing about Toyota, it doesn’t give up easily.  The maker has proven that time and again in a variety of market segments, including the minivan niche, as it comes back after a lackluster performance with a better product that gains more market share.

The one but that Toyota just hasn’t been able to crack – so far – is the huge and fast-reviving full-size pickup segment. Like Japanese rival Nissan’s Titan, the Toyota Tundra has simply failed to dent a segment still dominated by Detroit. But the industry giant is determined to gain some traction and will roll out its latest weapon when it reveals the new 2014 Toyota Tundra at the Chicago Auto Show next month.

Beyond confirming the introduction, the maker is revealing nothing, no hints about styling, payload or performance and definitely no teaser images.  In fact, there’ve been few of the normal spy shots making the rounds, underscoring Toyota’s apparent determination to take the industry by surprise when the next-gen truck is unveiled.

That said, a number of sources have been offering up hints as to what might be in store when we finally get a good look at the 2014 Toyota Tundra next month.

For one thing, don’t be surprised if the maker reverts to a more traditional, truck-like design. The Japanese have tried to create their own unique look for their pickups in recent years, but that seems to have been lost on the classically conservative American truck buyer.

Indeed, even Detroit has been following a cautious approach.  The newly unveiled 2014 Chevrolet Silverado and GMC Sierra models have been, if anything, faulted for taking an evolutionary approach. But so did Ford with its Atlas Concept, also unveiled at the 2013 North American International Auto Show.

Chevy and GMC were more adventurous in terms of interior design, but that seems to be something buyers do want.  Gone are the days when pickup cabins were expected to be Spartan affairs. So, anticipate a much-upgraded Toyota Tundra interior, as well.

That not only means a richer use of materials like leather and chrome but also a more advanced use of technology.  Don’t be surprised to see more touch-based displays to control and read out vehicle functions. Toyota will likely offer the latest take on its EnTune infotainment system, with an emphasis on features that owners can put to use on the job site.

Since the debut of the last Tundra, the so-called personal use segment of the pickup market has largely vanished. It could return slightly in the coming years but the real boom is expected to be on the fleet and commercial side, so expect most changes, inside and out, to focus on “truck-truck” buyers.

One thing they share with “civilians” is a desire for better fuel economy.  And with the Detroit kings putting more emphasis on V-6 alternatives and advanced technologies such as Direct Injection, displacement-on-demand, variable valve timing and turbocharging, it would surprise many if Toyota didn’t make a similar move.

There are other ways to deliver better mileage, and aerodynamic enhancements will likely be at the forefront.  It remains to be seen if Toyota will come up with some of the active aero features we’ve seen of late, such as active grille shutters that can seal off the nose when the engine doesn’t need a lot of cooling wind.  Ford’s Atlas Concept even boasted active shutters around the front wheel wells to reduce wind turbulence that can rob fuel economy.

The next F-Series will reportedly make extensive use of aluminum and other lightweight materials to reduce weight, according to some reports, by as much as 750 pounds. There have been indications Toyota has also put the new Tundra on a diet though few expect such an extreme number.

Will the maker offer a hybrid package? That is something it has signaled and few would be surprised if that was one of the powertrain options.

Meanwhile, longer range is also something that truck buyers have reportedly been demanding reports website TundraHeadquarters.com.

The big debate centers around whether Toyota will address one of the most frequent complaints from current and potential buyers: its lack of body styles.  Will it add new bed lengths?  Will a much-discussed heavy duty package be introduced? That latter likely wouldn’t come in 2014 but perhaps we’ll learn in Chicago whether a Tundra HD will follow in subsequent model-years.