Performance tuner thinks the late founder would have approved. 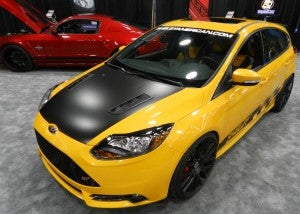 During his exile from Ford, Carroll Shelby worked with Dodge on hopped up hatchbacks, like the Dodge Omni GLH-S and the Dodge Shelby Charger.

“I think what you’ll see today are two cars that represent the spirit of Shelby,” Shelby President John Luft said.

Click below for a look at the new creations from the longtime Ford tuner. 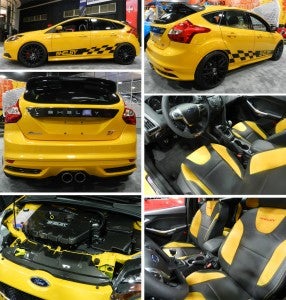 The Shelby Ford Focus ST features an upgraded suspension, graphics and interior and an engine performance upgrade is on its way.

The Shelby Focus ST features a tuned suspension, choice of three graphics packages and soon, a Shelby Performance Tune option that will add 30 to 50 horsepower to the base ST’s 252 horsepower.

Besides the engine performance upgrade, options will include a carbon fiber hood.

“You can personalize your car so you can make it what you want it to be,” said Gary Patterson, Shelby vice president and test driver.

The car also comes with a dash plaque and Shelby engine plate.

The Shelby package adds $14,995 to the cost of a Focus ST. The Performance Tune upgrade will cost about $500. 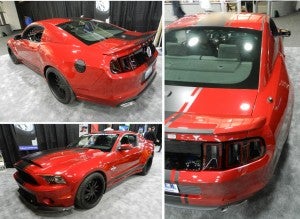 The Shelby GT500 Wide Body allows the rear end to accommodate up to 355-wide tires.

The big news for the Super Snake is the wide-body option, which will be available for any of Shelby’s Mustang-based upgrades.

“Ford Motor Co. gave us a tremendous car to begin with,” Luft said.

The wider rear end allows room for 345- or 355-wide tires, a critical feature considering the amount of horsepower produced by the Super Snake.

The Super Snake starts with the base Shelby GT500’s 662 horsepower and boosts it to as much as 850 horsepower.

“Adding Shelby’s new Wide Body option puts all that power to the pavement,” the company said.