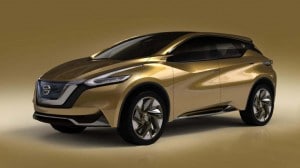 Expect many of the Nissan Resonance design cues to return with the next-gen Murano.

At a time when most manufacturers tried to disguise their early crossovers to look like conventional sport-utility vehicles, Nissan took a decidedly different direction, creating the expressively styled Murano.

So, with more and more makers moving in that direction as the classic SUV fades from the market, how does Nissan stay ahead of the crowd? What it describes as the “envelope-pushing” Resonance Concept gives us a good idea.  The show car’s “boldly futuristic styling” is a tease of what will become the next-generation Nissan Murano which was last restyled in 2009.

As with the original crossover, the Japanese maker is putting a premium on design, though the Nissan Resonance Concept also features a hybrid powertrain that will be offered as an option on the upcoming Murano replacement. As is often the case with concepts, the Resonance features a number of other innovative technologies, as well. 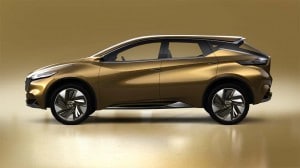 The Resonance hybrid drivetrain will also be offered in the next-gen Nissan Murano CUV.

“When the designers were first working on conceptualizing the Nissan Resonance, they were inspired by amazing scientific advancements in technology and material innovations,” said Francois Bancon, Nissan Motor Co. division general manager, Product Strategy and Planning.

“They also were inspired by the aspirations of those people who unabashedly embrace innovation and are optimistic about the future,” Bancon added. “It was about serving those people a concept vehicle that is forward-looking and fuses style with an athletic ride.”

Nissan describes the styling theme of the Resonance Concept as V-Motion, a shape that flows from the front grille and boomerang-shaped headlamps, across the hood and back through the body sides to the D-pillar.

Thin, steeply raked A-pillars help to create a sense the full-length glass roof is floating above the vehicle.

(Significantly, the use of large roof glass is gaining significant traction in the industry.  The Lincoln MKC crossover concept also displays an all-glass roof while the MKZ sedan’s glass roof even can retract.) 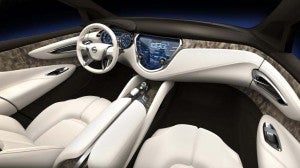 The instrument cluster appears to float.

Inside, the Nissan Resonance concept is designed to offer an inviting “VIP lounge” space, with plenty of room, the extensive use of warm materials like premium-stitched leather seats, and an instrument panel that also appears to be floating in space.

Suggests Nissan, “Technology is graphically layered to give a holographic experience and visual depth is used to separate information in order of importance.”

As for the drivetrain, the Resonance features a lithium-ion-powered hybrid system pairing a 2.5-liter internal combustion engine with a single motor/two-clutch electric drive system.

The new technology will be offered on a wide range of Nissan and Infiniti products over the next year, including the next-generation Nissan Murano.

That crossover is expected to go into production sometime next year and assembly will be transferred from Japan to the Nissan assembly plant in Canton, Mississippi.