Detroit maker hopes to get ahead of the curve in rapidly growing segment.

A concept for now, but expect to see the Lincoln MKC compact luxury crossover return in production form.

Once one of the leaders of the U.S. luxury market, Lincoln has been little more than an afterthought in recent years — but the Ford brand is hoping to regain its former glory with an aggressive product program and, with this week’s introduction of the new MKC, it is looking to get ahead of the curve, rather than lag behind.

While the compact crossover making its debut at the North American International Auto Show is officially described as a concept fans of the Lincoln MKC prototype won’t have to wait long to see a production version enter the line-up, one of four new models the maker has promised to introduce by 2014 – with an array of additional offerings to follow in the years beyond.

The Lincoln MKC targets one of the market’s fastest-growing segments. Sales of compact crossovers have grown 200% over the past five years in the U.S. market, and 60% in just 2012, noted Matt VanDyke, Lincoln’s new marketing chief.  And where they account for about 11% of the overall American market they’ve surged to 25% of the luxury segment. 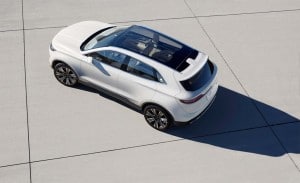 Like the MKZ sedan, the MKC crossover concept features an all-glass roof - though it's not retractable.

Equally significant is the fact that buyers are not just moving up from mainstream market niches, “but are coming from other premium segment vehicles,” VanDyke told TheDetroitBureau.com during a one-on-one background session on the MKC.

That means they may be trading in more expensive vehicles – but they’re also expecting more than just an entry-level crossover, VanDyke stressed. So, don’t expect the MKC to barely slip into the luxury category.

In concept form, it is trimmed out as lavishly as just about anything else in the Lincoln line-up, in fact – with notably more leather, wood and chrome detailing than the brand’s recently launched entry sedan, the 2013 MKZ.

The two vehicles do have a few things in common, notably the open-winged grille first revealed on the Z- sedan, which marked a dramatic departure from the old waterfall Lincoln grille.  But even here, designers have taken things a step forward with the MKC, adopting distinctive two-piece metal bars, rather than a simple piece of stamped chrome.

Designers took pains to make the compact Lincoln MKC concept look bigger, both inside and out.

The hood features sculpted creases that flow into the headlamps. A rising character line draws the side profile together, running from the front to rear arches that frame 20-inch wheels and tires.

At a surface level, one might notice a bit of a resemblance to the extremely popular new Range Rover Evoq compact CUV, something Murat Gueler, the exterior lead designer took as a compliment – though he also suggested that the British model is more of a “brutal box,” insisting the MKC is more of a “flowing and elegant design.”

The image of an eagle’s open wings carry beyond the grille and are apparent in most of the MKC’s design details, both inside and out, including the one-piece light bar that stretches across the entire tailgate.  Inside, it influences such details as the chromed air vents.

The Lincoln MKC uses 5-LED headlamps framed in wraparound Daytime Running Lights that emphasize the vehicle’s width.  In fact, one of the most notable features of the concept’s design is the way it appears much larger than the vehicle’s actual dimensions might suggest. 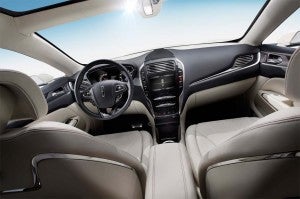 It may be small but that doesn't mean it's entry-level, according to Lincoln strategists.

The same is true inside, the 4-seat layout appearing to be that of a midsize, rather than compact, vehicle.  A center console runs the full length of the cabin providing plenty of storage and a visually distinctive styling cue.

The instrument panel mimics the visual trick used to match the apparent width of the hood, and the flying bridge of the MKZ has been revised “to open up as much as possible” the sense of spaciousness, explained Lincoln interior design chief Soo Kang.

The reprogrammable gauge cluster, the big MyLincolnTouch infotainment display and the push-button shifter knobs also have been picked up from the new sedan, which went on sale during the final days of 2012.

But Lincoln designers also moved to correct a few weaknesses of the MKZ, avoiding the hard and unfortunately cheap-looking plastic panel atop the sedan’s center stack.  Don’t be surprised to see a mid-cycle update, as it’s one of the few strong and oft-repeated criticisms of the 2013 MKZ. 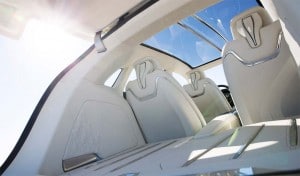 Expect to see a few changes by the time the production version of the MKC reaches showrooms.

Lincoln clearly needs to prove what it can do.  The maker had a mediocre year in 2012, failing to gain the traction shared by most of its luxury competitors – though the launch of the MKZ came too late in the year to add much traction. With 1,000 advance orders, marketing director VanDyke is confident the new sedan will help kick off a better 2013.

But one vehicle does not a brand make, certainly not when competitors like BMW, Mercedes-Benz and Audi are rushing new models to market at a record pace.

So, it will be critical for Lincoln to get it right when it launches the production version of the MKC in the near future.  Expect some obvious changes from the concept, such as more conventional door handles and a cargo space that isn’t upholstered in leather and Alcantara. But Lincoln officials promise the production MKC will not retreat to entry-level blandness.

Beyond the compact crossover, Lincoln is expected to launch several new models, including all-new versions of the aging Navigator and the MKS sedan.

Further out, expect to see an expanded range of offerings likely to include Lincoln’s first rear-drive model since the abandonment of the tired Town Car. In a conversation with TheDetroitBureau.com last month, Ford CEO Alan Mulally confirmed the Mustang-based offering and other new products have already gotten the formal go-ahead.

Whether consumers will give their go-ahead is another matter, but Lincoln is confident it is taking the right steps to target the segments of the market where it has the best opportunity to grow.