Lexus Punches up Passion Quotient with 2014 IS 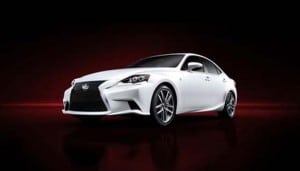 Lexus abandons staid for a more passionate design with the 2014 IS remake.

For the new Lexus IS, Chief Engineer Junichi Furuyama, flipped  conventional on its head.

“I adopted an entirely different approach to the development of the all-new IS,” IS Chief Engineer Junichi Furuyama said. “Specifically, it was to make an entertaining driving experience a major premise behind all aspects of performance.”

You hear the word, “passion” in Lexus circles a lot these days.

Lexus introduced its second-generation IS, meant to be a BMW 3-Series fighter, at the Detroit Auto Show today.

A shift in design direction that began with an all-new GS sedan two years ago now transforms the marque’s entry-level offering, the 2014 Lexus IS, which is making its debut at the North American International Auto Show.

Intended to be sportier and more performance-oriented, the 2014 IS sedan will be available in rear- and all-wheel drive versions while offering a mix of powertrains in the IS 250 and IS 350 variants.  Also in the works will be a further evolution of the IS F-SPORT, with the sport trim available across the entire model range

The 2014 Lexus IS is the brand's latest addition to adopt the new signature spindle grille.

Meanwhile, for the first time, Lexus will add the IS 300h, the first IS to feature the Lexus Hybrid Drive system already available on most of the maker’s other product lines.

“The conventional approach involves developing each individual aspect in the hope that they will combine to offer an engaging driving experience. By contrast, development of the new IS flipped this process on its head, first establishing the pleasurable driving experience owners desire and then developing the individual performance elements to support it,” he said.

Every aspect of the IS has been engineered with a renewed focus on engaging performance, agile handling, accurate response to driver input and highly communicative feedback, the maker insists. 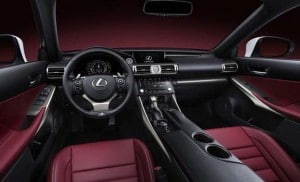 The IS will be offered with a variety of powertrain options, including a new hybrid.

“The IS has always been precise and fun to drive,” said Mark Templin, Lexus general manager. “The all-new IS kicks it up a notch with true sport sedan driving dynamics, state of the art onboard technologies, and an all-new design that makes it look fast even when it’s standing still.”

Templin noted driving performance is a key selling point in the sport sedan segment. In conjunction with a bold new design including the Lexus spindle grille, the all-new IS has been painstakingly engineered to have excellent dynamic capabilities to provide an exceptional driving experience.