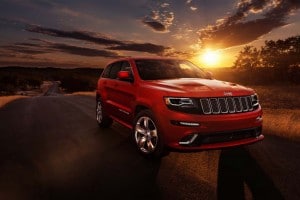 Barely three years after delivering a dramatic redesign of its big Grand Cherokee, Jeep is tinkering with success and while the updates for 2014 include a number of new safety and security features, an enhanced infotainment system and a new mileage-boosting 8-speed automatic, perhaps the biggest story for the upcoming model-year will be the addition of an all-new EcoDiesel.

A number of the updates, including the 8-speed gearbox, will be shared with the 2014 Jeep Grand Cherokee SRT performance model which, for the next model-year, will see its rated towing capacity jump by a significant 44%.

“It’s going to be a big year for product from Jeep,” proclaims the maker’s general manager, Michael Manley.

The updates to the various Grand Cherokee models will coincide with some big revisions to the Jeep Compass and Patriot compact crossovers that also debut at this year’s North American International Auto Show in Detroit. 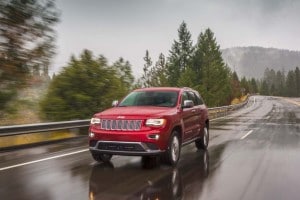 The 2014 Jeep Grand Cherokee line will add a number of new safety features, such as Forward Collision Warning.

(For more on those 2014 models, Click Here.) Meanwhile, industry sources suggest still more big news from Jeep could be revealed in the coming months, perhaps at the Chicago or New York Auto Shows.

“With the new 2014 Jeep Grand Cherokee, we have taken the industry’s most highly acclaimed SUV and elevated it to an even higher level,” boasts Mike Manley.

There are some modest though welcome improvements to both the exterior and interior, such as the optional new bi-xenon headlamps, but the 2014 updates are largely incremental and focused on performance, ease of use and fuel economy.

The latter gets a boost on the standard Grand Cherokee with the addition of the new 8-speed gearbox.  It allows the SUV to squeeze out as much as 25 mpg on the highway with the 3.6-liter Pentastar V-6 and 21 mpg with the 5.7-liter V-8. 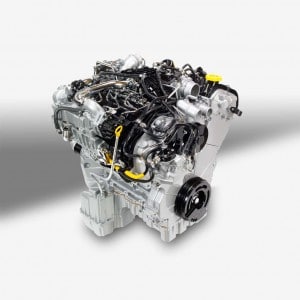 The new EcoDiesel will deliver an estimated 30 mpg.

But the Grand Cherokee will get a segment-leading 30 mpg highway thanks to the 3.0-liter EcoDiesel V-6 that has been in the planning stage for several years.  The engine has plenty of pulling power, making 240 horsepower and 420 lb-ft of torque.

Other revisions for 2014 include a new 8.4-inch touchscreen infotainment display and updated Uconnect system.

Most of the additions can be found on the new 2014 Jeep Grand Cherokee SRT, as well. The top-performing Jeep SUV churns out 470 hp and 460 lb-ft from its 6.4-liter Hemi V-8. That not only makes it the fastest-ever Grand Cherokee but drives towing capacity up 44%, to 7,200 pounds.

For those who might be more interested in entertainment features, there’s an optional 825-watt, 19-speaker Harman Kardon audio system .