Jeep Patriot gets a temporary reprieve. 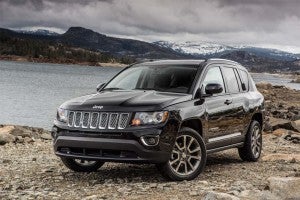 A quick search of the web reveals a wide range of opinions about what Jeep has in store for its two smallest models, the Compass and Patriot.  And there’s good reason.  They’re actually two takes on the same platform, one designed to look like a fairly conventional SUV, the other a crossover.

Contrary to some forecasts that the one or both models would vanish or be replaced by the 2014 model-year, it seems they’re due to stick around, at least for now. But the changes being revealed at this year’s North American International Auto Show would suggest that the Jeep Compass is the most likely to remain in the line-up long-term.

“We knew that Compass and Patriot needed work to take them into the future,” explains the brand’s chief executive Michael Manley.

Both undergo some notable changes for 2014, and they will share a new PowerTech 6-speed automatic gearbox that replaces the previous CVT transmission, and which will help the two compact crossovers achieve an EPA-rated 30 miles per gallon on the highway. 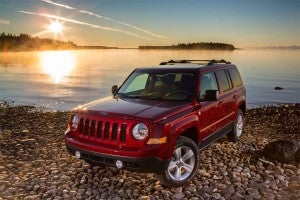 The 2014 Jeep Patriot, on the other hand, looks more like the old Jeep Cherokee.

If the updated 2014 Jeep Compass design provokes a sense of déjà vu, well, no surprise as it becomes “the little brother of the Grand Cherokee,” suggests Klaus Busse, Chrysler’s interior design leader.

The look is a lot more upscale than the outgoing Compass, with new projector lamps and 18-inch machined wheels among the options, as well as a new backup camera.  Another refined touch is the switch to an acoustically laminated windshield that is claimed to help reduce wind noise.

While this is still an entry-level crossover, Busse’s team set out to make that a little less obvious with such details as new armrests and through the use of improved materials on the instrument panel and doors.  Leather trim is now available on the Lattitude and Limited models.

On the safety front, the 2014 Jeep Compass also gets new front-mounted side-impact airbags.

Unlike many competing crossovers, Jeep has continued to ensure that both of its smallest models retain their Trail Rated status and that carries over into 2014, even as a number of other brands abandon even the pretense of off-road capability. 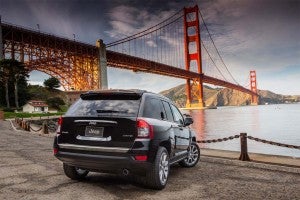 The Patriot looks more the classic trailbuster, the second of the twins retaining a more classic Jeep design likely to bring to mind the original Cherokee model.  The Patriot receives many of the same updates, such as the side airbags and new 6-speed automatic, however, it’s the true entry-level model off the compact platform.

The 2014 Jeep Patriot will carry a base price of just $15,995 plus destination fees and taxes.

The two engines are available for both of the compact crossovers.

Over the long-term, Jeep clearly wants to enhance its position in the fast-growing compact CUV segment – which has seen sales surge by about 200% over the last five years, according to industry data. But most observers anticipate that unless demand justifies the expense of offering two different body styles for essentially the same package, Jeep is likely to settle on just one of the two models. And, for the moment, most observers would bet on Compass to be the one sticking around.