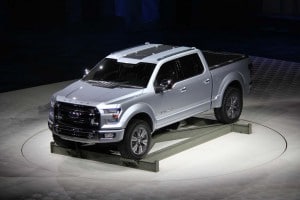 The Ford Atlas Concept signals the maker's plans for the next-generation F-Series pickup.

Ford tossed a hand grenade into the already escalating truck wars, literally dropping in on the North American International Auto Show with the Atlas, a concept pickup that provides some clear hints about where the maker is going with the next-generation F-Series, the country’s best-selling truck for more than a third of a century.

The widely-rumored reveal came just a day after Chrysler won the coveted North American Truck of the Year award during the Detroit Auto Show’s opening ceremonies. Meanwhile, Chevrolet had hoped to steal the show with Monday’s official unveiling of the next-generation Silverado pickup.

Senior Ford officials did little to deny that they were intentionally trying to steal their competitors’ thunder by bringing the Atlas to the 2013 NAIAS and teasing what they promised would be a wide range of new industry-benchmark features and capabilities. 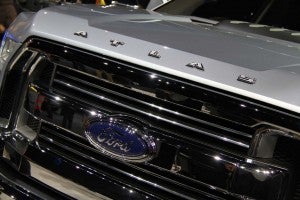 Many of the design cues are familar but Atlas signals the next F-Series will be a very different truck.

“The Ford Atlas Concept previews the innovations that will transform what people expect from their pickup,” said Raj Nair, Ford group vice president, Global Product Development. “With 36 years as America’s best-selling pickup, we are absolutely committed to setting the agenda in the truck market.”

The Ford Atlas Concept clearly picks up on the familiar F-Series design cues, including the chrome grille and kick-up in the side window glass. But the show car was clearly intended to take things up a notch, with styling that emphasized a mix of ruggedness and functionality.

There are a number of new features, such as an improved step-up to ease access for loading things into the cargo bed.  Backup Trailer Assist helps simplify hitching up a trailer. Power running boards also ease the effort of getting in and out of the big rig, pulling out of sight when not needed to improve both durability and aerodynamics. 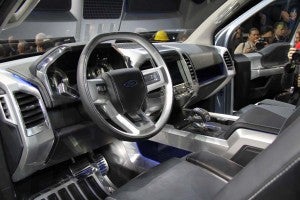 Inside the Ford Atlas concept.

Though Ford didn’t offer details, the maker also said Atlas is powered by the next-generation V-6 EcoBoost, Ford’s turbocharged powertrain that already accounts for about 40% of current F-Series sales. The maker noted the current EcoBoost engines have achieved fuel economy savings of as much as 20%.  The various technologies under consideration on Atlas, Ford says, could save another 2 mpg on the Highway — without discussing the potential additional savings of an update to EcoBoost.

What went nearly unsaid was the fact that the Atlas Concept – and the next-generation Ford F-Series itself – makes extensive use of advanced, lightweight materials such as high-strength steel and aluminum and possibly even some composites.

“Part of our strategy is to put all our vehicles on a diet,” Ford COO Mark Fields told TheDetroitBureau.com, noting the goal is to remove anywhere from 250 to 750 pounds off the weight of its various products.  Insiders reveal the higher figure is a target for the F-Series remake due in about two years.

Part of the challenge of turning to alternatives like aluminum or composites is ensuring they can hold up under the rigorous demands a truck is likely to face.

Nair said Ford has growing confidence about the use of aluminum already on the current F-Series – which could convince the maker to use even more on the production version of the Atlas.

But “When you look at our approach to trucks, it’s to lead in fuel economy, capability and durability,” emphasized Fields, adding that, “If anything, our goal is to improve capabilities,” and ensure that any new truck won’t burden users with increased operational costs.

That’s going to be critical considering the so-called personal use portion of the pickup market has largely dried up over the past decade. But there is a nascent resurgent in demand from commercial users now that the American economy is beginning to recover, and Ford is hoping it will hit the market with the real F-Series just at the right time.

In the meantime, several of its competitors, including Chrysler CEO Sergio Marchionne, acknowledge Ford will ramp up the pressure once the next F-Series appears.

The real challenge, however, could be on Toyota and Nissan, two makers who have struggled to make inroads with full-size trucks that have gained little traction in the market.

So, for now, Ford is leaving the rest of the industry – and potential buyers – waiting to see whether the Ford F-Series modeled after Atlas will up the ante in one of the market’s most competitive segments.