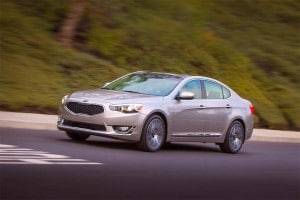 Like Hyundai, its better-known Korean sibling, Kia has some aggressive upscale aspirations – and it’s revealing what’s in store with the new 2014 Cadenza premium sedan making its first appearance at the North American International Auto Show.

As with other recent Kia offerings, such as the stylish Optima, the bigger model adopts a sleeker and more upscale appearance developed under the guidance of former Audi designer Peter Schreyer, who has led the dramatic transformation of the Korean brand since joining Kia five years ago.

Known as the K7 in the Korean market, the new 2014 Kia Cadenza is slightly longer than the BMW 5-Series, albeit a bit narrower.  It shares the same underlying platform as the Hyundai Azera and will go up against such competitors as the Acura RL and the newly restyled Toyota Avalon – as well as Chevrolet’s 2014 Impala update. 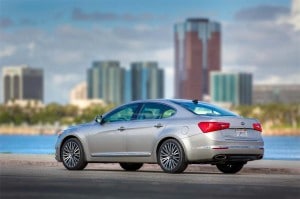 The Cadenza features the latest iteration of the distinctive “Tiger Nose” design theme introduced by Schreyer, who recently was named one of three Kia presidents. The distinctive grille is flanked by quad headlights accented by LED positioning lights.  The strong silhouette adopts a subtle curve to the roof line with a curving cutline that flares upward, and is accented by a chiseled indentation. From the rear, the Cadenza is anchored by a high deck, twin oval tail pipes and standard LED taillamps.

While not quite moving into the same territory as the Hyundai Genesis, the Cadenza is a definite step up for Kia and could usher in even more up-line models going forward, analysts suggest.

“Since the introduction of the range-topping Optima SXL last year, we have seen an increasing number of customers in our retail outlets looking for a sedan with even more upscale amenities and technology,” said Michael Sprague, executive vice president of marketing & communications, KMA.

“The Cadenza is the new flagship for Kia in the U.S. market,” Sprague adds, “and when it goes on sale later this year, it will introduce a number of advanced systems that promise to set a new standard in the premium segment.”

The sedan features the most powerful V-6 ever offered by Kia, a Direct Injection, 3.3-liter powertrain that makes 293 horsepower and 255 lb-ft of torque. It’s paired with a six speed automatic with manual shift mode and paddle shifters.  Power is driven to the front wheels.

Kia plans to bring the 2014 Cadenza to U.S. showrooms by spring.