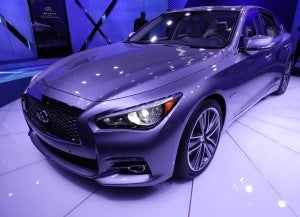 The design of the new Infiniti Q50 was strongly influenced by the maker's Essence concept vehicle.

With a performance by the celebrated Cirque du Soleil to kick things off, Infiniti has given a formal send-off to the little sedan that will be ushering in some big changes for the Japanese maker.

Long lingering in the second tier of the global luxury market, Infiniti now has some decidedly first-tier aspirations, with its own design and engineering team, a new headquarters in Hong Kong, a new global CEO – and the new Q50 to usher in a product line-up set to grow substantially.

It’s first model in the resurgence, the Q50, was formally introduced Monday at the North American International Auto Show.

The replacement for the old G- sedan, the 2014 Infiniti Q50 is the first model to adopt the brand’s new alphanumeric naming strategy.  Going forward, passenger cars will all begin with a Q model designation, all crossovers and SUVs will begin with a QX. 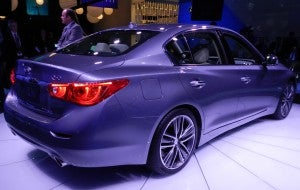 The Infiniti Q50 will be offered with a choice of standard gas or hybrid powertrains and front or all-wheel drive.

de Nysschen said Infiniti honed the performance of the Q50 with the help of Red Bull Racing’s Sebastian Vettel and Sebastien Buemi.

The Q50’s interior was designed with serious drivers in mind.

“The Q50’s cockpict is a driver’s space,” de Nysschen said.

The Q50 will introduce an industry-first technology – Infinit Direct Adaptive Steering System or what has been called drive-by-wire technology. Instead of a direct connection between the steering wheel and the road wheels, DAS connects electronically, but has a fail-safe mechanical system as a backup.

“Someday, all cars will use this technology, but today, you can only get it on an Infiniti,” de Nysschen said.

Of course, Infiniti’s new naming convention is going to be of only secondary consideration to consumers. What will likely matter more is the styling, price, performance, fuel economy and features of the new sedan. While Infiniti is saving some details for closer to launch, it has revealed enough during its Detroit Auto Show news conference to entice potential buyers.

That includes the revelation that the new sedan will feature a potentially breakthrough steer-by-wire system that it claims can both improve safety and reduce driver fatigue.

The Infiniti Q50 sedan’s styling has been strongly influenced by the seductive Infiniti Essence concept vehicle, which won kudos for its low, wide and athletic proportions.

The cabin uses a cockpit-like layout to position its controls readily within the driver’s reach.  That includes the new Infiniti InTouch communications system which uses oversized dual touch-screen displays to operate functions such as navigation and hands-free phoning. 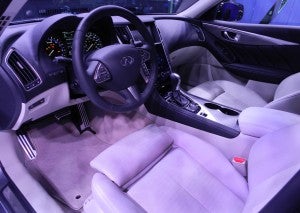 The 2014 sedan will be powered by either of two powertrain options.  That includes Infiniti’s 3.7-liter DOHC 24-valve V-6, rated at 328 horsepower and 269 lb-ft of torque. The alternate choice is the new Infiniti Direct Response Hybrid, a new one-motor/two-clutch system that pairs a 296-horsepower V-6 with a 67-hp electric motor producing a combined output of 354 hp. Both packages are paired with a 7-speed automatic and offer optional solid magnesium shifters.

Both versions of the 2014 Infiniti Q50 also can be ordered with either front-drive or optional Intelligent All-Wheel Drive. 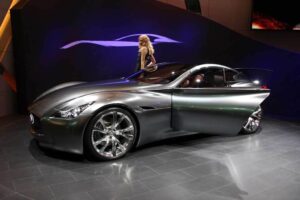 The Infiniti Essence concept debuted at the 2009 Geneva Motor Show.

The former technology is a steer-by-wire system that disconnects the normal, mechanical link between the steering wheel and a vehicle’s front tires.  Instead, a complex computer control system reads the driver’s inputs and delivers them through a set of motors and actuators. The Direct Adaptive Steering system can respond faster than a mechanical linkage and also can limit or entirely remove the normal road bumps and impacts that can tire a driver, improving safety in the process, Infiniti claims.

The 2014 Infiniti Q50 sedan will reach U.S. showrooms over the summer — and pricing and fuel economy numbers will likely be released shortly before sales begin.

The sedan will be followed by a Q-badged replacement for the outgoing Infiniti coupe and convertible models.  The maker has also promised to introduce a new flagship sedan it intends to dub the Q70.

Bryan Laviolette contributed to this report.