Concept Style introduced at private press preview, but won't be shown on Mercedes' stand at the Detroit auto show. 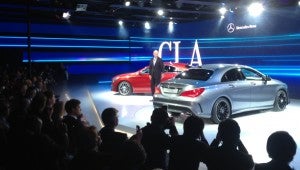 The automotive mantra, at least for Americans, has traditionally gone something like this: “bigger is better.” But that’s rapidly changing as motorists begin to downsize – both in mainstream and luxury segments of the market.

So, it seems Mercedes-Benz may have picked the perfect time to introduce the new CLA, the production version of the Concept Style show car it unveiled at the Beijing Motor Show last April. The new CLA250 made its debut Sunday night in advance of the 2013 North American International Auto Show.

If the name sounds familiar, no surprise, as it is a downsized version of the popular Mercedes CLS, the German maker’s trend-setting Coupe-Like Sedan. The “A” signifies the second-generation Mercedes A-Class, meanwhile, the smallest product line in the marque’s portfolio. 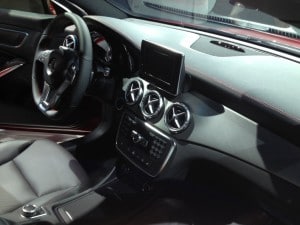 The CLA-Class will have high-tech features including standard MBrace2, Mercedes' new telematics system.

While the Mercedes executives who introduced the CLA also talked about the new S-Class and E-Class, it’s clear that they are particularly proud of the new baby Benz.

“Our goal is to repeat the success of the CLS in the youth segment,” said Joachim Schmidt, Mercedes’ executive vice president of sales and marketing. He said Mercedes hopes to attract Gen Y to the brand and so far its working; the average age of those who have expressed an interest in the CLA are 10 years younger than the rest of the Mercedes lineup.

Thomas Weber, a member of Mercedes’ Board of Management, said the company was proud to announce that the CLA sets a new benchmark for aerodynamics amongst all series production cars with a claimed coefficient of drag of .22.

The U.S. may eventually get several different versions of the A-Class but, for now, we’ll start off with the CLA, its distinctive coupe styling disguising the fact that it really is a good bit shorter than the Mercedes C-Class, currently its smallest American offering.

But, as European motorists have long realized, size and price don’t have to go hand-in-hand. And the Mercedes CLA will boast a solid list of luxury features, from a leather-lavished interior to an array of high-tech infotainment and safety features.

Both inside and out, the 2014 Mercedes-Benz CLA picks up about 95% of the design cues of the Concept Style.  With the optional Sport Package, that even includes the distinctive, pixelated grille that features the familiar tri-star logo appearing to float on a constellation of stars.

Three prominent character lines also return, one flowing downward from the front fenders, a second intended to enhance the sense of muscular rear haunches, and the third extending in a sweeping curve from front to back. A key goal of the overall design is to give the 4-door, 5-passenger CLA a longer, wider feel. 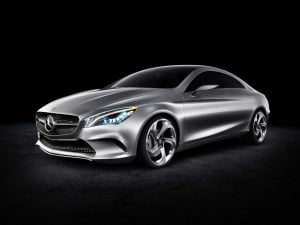 “The response to the Concept Style Coupe was overwhelming. The most frequent comment by far was ‘Please put this car into series production.’ That’s precisely what we are doing now,” notes Dieter Zetsche, Chairman of the Board of Management for Daimler AG and Head of Mercedes-Benz Cars.

Perhaps one of the more notable decisions in bringing the concept to production was the adaptation of a front-drive layout – a trend more and more luxury makers, including rival BMW, are adopting as they downsize.  The Mercedes CLA will be offered in the U.S. with a single powertrain option, a 2.0-liter turbocharged inline-four making 211 horsepower and 258 lb-ft of torque. The engine will be mated to a 7-speed dual clutch automatic gearbox.

Inside, the CLA aims to deliver a more upscale feel than the typical small entry-luxury car.  The air vents are set in galvanized surrounds, for example, and the infotainment display is set in piano black within a silver-tinted frame. A large panoramic sunroof is among the CLA’s options.  The 5.8-inch display is standard, as is Bluetooth technology.  It can be upgraded, however, to a 7-inch display with hard-drive navigation, a 6-disc CD changer and rearview camera. 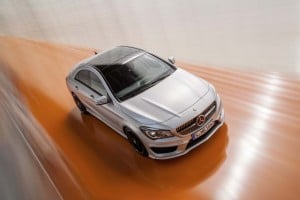 Mercedes executives claim the CLA is the most aerodynamic series production car ever made with a drag coefficient of .22.

Mercedes all-wheel-drive 4Matic system is available on the CLA250 and torque can be fully shifted between front and rear axles, according to Mercedes. Since the base car will be FWD, Weber said Mercedes decided to design a new all-wheel-drive system that will debut on the CLA.

Standard high-tech safety features include the radar-guided Collision Prevention Assist which can warn a driver of obstacles and prepare the car for maximum braking at speeds above 4 mph.

The new CLA unveiled at the Detroit Auto Show will reach U.S. showrooms by autumn 2013 and Mercedes has strong aspirations for its sales potential, says Zetsche.  “With its unique design language, I am convinced that the CLA will make a powerful mark on the image of the Mercedes-Benz brand.”

Bryan Laviolette contributed to this report.