Cadillac Plugs In with New ELR

GM takes plug-in technology up-market with the debut of the 2014 Cadillac ELR.

For General Motors, the good news is that sales of the Chevrolet Volt plug-in hybrid tripled last year. The bad news is that demand was still barely half of what the maker had hoped for.

Some analysts – and more than a few GM insiders – believe sales might have been significantly stronger had the maker first offered its extended-range electric technology in a more upscale product where buyers would be more willing to absorb the price premium.

That theory will be put to the test later this year with the launch of the long-awaited Cadillac ELR at the 2013 North American International Auto Show.  Based on the popular Caddy Converj concept, it shares the basic drivetrain technology found in the Chevy Volt but adds plenty of upscale features and some distinctively eye-catching styling.

“There is no other vehicle that combines guilt-free motoring in such a dynamic package,” contends Mark Adams, the design director on the Cadillac ELR project.

If the vehicle – which the maker prefers to call an extended-range electric vehicle – looks familiar, that’s no surprise. The development team, led by chief engineer Chris Thomason, was under orders from the top to make sure they came as close as possible to the original Converj concept’s bold look.

In production form, the ELR clearly belongs to the Cadillac brand with its distinctive Art & Science design theme.  That means a wedge-shaped body with a bold egg crate grille and both head and taillights that unabashedly harken back to the classic fins of Caddy’s past.

But this is no retro-mobile.  The design is distinctly modern – and bears the stamp of having been carefully honed to ensure maximum range and fuel-efficiency, with extensive use of fluid design computer technology, as well as plenty of time in the wind tunnel. The door-mounted sideview mirrors, alone, went through more than two dozen iterations in the search for a shape that would reduce aerodynamic drag and wind noise while still pleasing the eye. 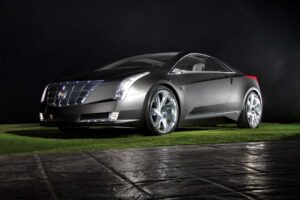 Designers were under pressure to stay as true as possible to the Caddy Converj concept seen here.

The grille, meanwhile, is largely sealed with air for the compact 1.4-liter range-extending internal combustion engine actually sucked in below the bumper.  The underbody is almost completely sealed and the exhaust pipes are well hidden.

Such measures are expected to deliver range of around 35 miles on battery power alone – roughly as much as the Chevy Volt – all the more impressive since the Cadillac ELR is several 100 pounds heavier than the mainstream plug-in hybrid.

It also will be quicker.  Preliminary estimates have 0 to 60 times rated at around 8.0 seconds, as much as a full second quicker off the line than the Volt.

Both vehicles, however, share almost all key powertrain details, meaning a T-shaped 16.5 kilowatt-hour lithium ion battery pack that rides down the center tunnel in the 4-seat ELR.  Under normal conditions, the front wheels are driven exclusively by electric traction, the Caddy plug-in’s electric motor spinning out 154 kilowatts – or 207 horsepower – and 295 pound-feet of torque. 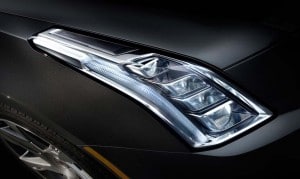 The Cadillac ELR's headlights -- like every other lamp on the plug-in hybrid, inside and out -- use energy-saving LED technology.

The modest 84-hp internal combustion engine is designed to serve as a generator once the batteries discharge, though as with the Volt it adds a small bit of additional torque under aggressive launch or high-speed driving conditions.

As with its competitors, GM is cagey with details of how it programs the battery drive control system but insiders tell TheDetroitBureau.com that as the maker has become more comfortable and confident with its lithium battery chemistry it has begun to use more of the potential power it can store. In the first year, that meant drawing barely half of the Volt’s state of charge, but it will approach two-thirds on ELR, apparently.

For the moment, Cadillac is also keeping pricing information close to the vest but it is clear there will be a significant premium over the Chevy Volt, which carries a $39,995 MSRP for the 2013 model-year. (That’s before the $7,500 federal tax credit both plug-ins qualify for.) 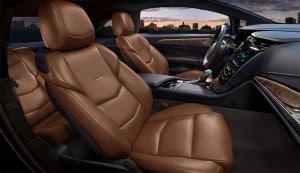 The goal was to come up with a sumtuous and exclusive design that would justify the added premium for battery drive technology.

That’s no surprise considering the extensive array of features built into the 2014 Cadillac ELR.  The interior is lavishly appointed, with leather-wrapped and hand-sewn dashboard stitching. The plush yet sporty seats will be carried into the next generation version of the Cadillac CTS. Among the few options, Caddy will offer ELR buyers an even more exclusive 20-way semi-aniline seating package that is arguable the nicest on any of the brand’s products.

On the high-tech side, there’s the new Cadillac CUE voice-operated infotainment system, with its large display topping the center stack. The gauge cluster is based around a reprogrammable 8-inch LCD, as well.

A wide range of high-tech safety features, such as automatic collision warning and cross-traffic alert, will come standard, as well as the distinctive Cadillac seat-shaking warning system, which is designed to show the direction of a potential problem. 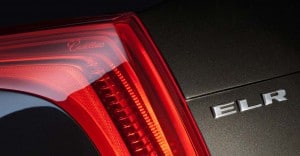 Cadillac does not expect the ELR to generate significant sales. It is more a halo car for the brand and for extended-range electric technology.

The ELR is not intended to add a huge amount of momentum to GM’s electrification program.  “We’re not going to product this vehicle in a lot of volume,” stressed Thomason.  “There will be something of an exclusive nature to owning this vehicle.”

But GM is nonetheless hoping the ELR will put a halo around the company, the Cadillac brand, and plug-in hybrid technology.

It’s not alone.  Nissan, which launched its Leaf battery-electric vehicle around the same time as the Chevy Volt, is finishing development work on the Infiniti LE, a luxury BEV coming in 2014.  And Mercedes-Benz, BMW and Audi are all readying various-based vehicles of their own, while Lexus continues expanding its range of more conventional luxury hybrids.

Some might question the strategy.  After all, luxury buyers are less likely to need the fuel cost savings battery technology promises to achieve. But many potential upscale buyers are motivated as much by their desire to “save the Earth,” as they are to save a few dollars, and for them, getting the added features and performance could be the big draw – or so Cadillac is hoping.