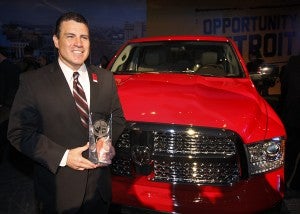 Detroit makers dominated as the 2013 Detroit Auto Show opened up with the annual North American International Car and Truck of the Year awards.

Cadillac claimed the coveted Car of the Year trophy with its new 2013 ATS compact luxury sedan, the new Ram 1500 pickup was honored in the truck/utility category.

“I need someone to come up here and pinch me to make sure that has really happened,” declared Fred Diaz, Ram’s general manager, as he climbed the stage to collect the trophy.  The award was all the sweeter, he proclaimed, considering that parent Chrysler was bankrupt and written off for dead, by many, just a few years ago.

But the same could have been said for General Motors which, like Chrysler, emerged from Chapter 11 in mid-2009 only with the help of a federal bailout that continues to generate controversy.  That, GM officials, have said, is why it’s so important to get third-party endorsements for vehicles like the ATS. 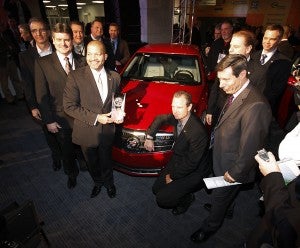 “When you consider Cadillac’s effort to reestablish itself as the ‘standard of the world,’ this is an important moment,” explained Dave Leone, chief engineer on the ATS project.

This marks the first time in the 20 years of NACTOY that Cadillac has won, though it was nominated once before.  Ram won once before for the 1500 pickup – or more precisely, the truck took honors for the Dodge division before Ram was spun off on its own.

The truck went up against two crossovers during the first year the category official included both conventional trucks and utility vehicles, the Mazda CX-5 and the Ford C-Max.

On the car side, CTS had squared off against the Ford Fusion and the Honda Accord.

A total of 49 jurors from the U.S. and Canada participated in the balloting – a group representing a diverse range of voices designed to avoid the potential bias other awards face. (In full disclosure, TheDetroitBureau.com publisher Paul A. Eisenstein is a member of the NACTOY jury.)

More than 50 different vehicles initially were considered by the NACTOY panel, a list slowly trimmed back as part of a process that included a grueling shoot-out among contenders in the appropriately named town of Hell, Michigan.

Over the years, Detroit’s manufacturers have taken 11 Car of the Year awards, with Japanese makers winning three, Europeans two and the Koreans twice.

On the truck side, domestics have won 13 times, as of today, Japanese makers four times and Europeans have captured three awards.

Considering the credibility placed in the NACTOY awards, industry observers expect Cadillac and Ram to begin heavily promoting their victories in their marketing campaigns almost immediately.