BMW 4-Series in the Flesh in Detroit

Bavarian automaker spins the coupe off from the 3-Series sedan line. 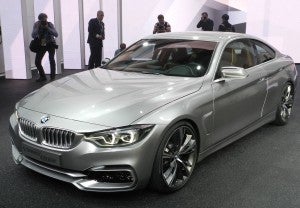 BMW is spinning off its 3-Series Coupe into a separate model called the 4-Series.

Is there some danger in moving the coupe version of the BMW’s vaunted 3-Series to a new nomenclature?

BMW pulled the cover off the 4-Series Concept Coupe today at the Detroit Auto Show.

Ian Robertson, member of BMW AG’s Board of Management, said the new car offers a new level of presence, elegance and dynamics.

“In designing the Concept 4 Series, we were determined to make a Coupe that stands above all others in its class,” Robertson said. “The result is an entirely new Coupe with more aesthetic differentiation and more product substance.

BMW’s 4-Series is the coupe counterpart to the 3-Series, just as the 6-Series is to the 5-Series and the 8 is to the 7. Apparently, in BMW-ese, even numbers signify two doors rather than four.

While BMW is calling the car it is showing at the North American International Auto Show a concept, the production version will likely be very close to the show car. 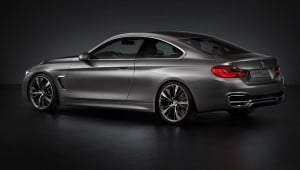 The 4-Series is lower, wider and longer than the previous 3-Series Coupe.

Compared to previous 3-Series coupes, the new 4 is longer, wider and lower, giving it a more coupe-like profile rather than that of a two-door sedan.

Explains a news release from BMW, “The ‘4’ doesn’t just mark the start of a new cycle, it represents the zenith of a development curve. BMW has given the new model its own individual character and a standalone design – and, in so doing, has turned ‘4’ into segment shorthand for aesthetic and dynamic appeal.”

The BMW Concept 4 Coupe’s wheelbase, at 110.6 inches, is about 2 inches longer than the old 3-Series Coupe, and it is longer, overall, at 182.7 inches. The front track is almost two inches wider, the rear widened more than three inches. At 71.9 inches, subtract nearly two inches in width, while the roofline has been lowered about 0.6 inches.

But the basic BMW template remains: short overhangs, a long wheelbase with a long, sweeping hood, the passenger compartment set back. The initial impression of the Concept 4-Series Coupe is that of kinetic motion, even more than with the old 3-Series two-door.

Speaking of motion, BMW hasn’t revealed powertrain details, but it’s safe to assume that they will be the same as offered in the 3-Series. In other words, expect the 240-horsepower 2.0-liter four cylinder to be the engine in the base 428i and a twin-turbocharged 3.0-liter straight six producing 300 horsepower in the 435i.

The face is also recognizable, though the full LED headlamps and double-kidney grille appear to be more slender and sporty. Subtle features, such as the way the grille has been closed off, are meant to improve aerodynamics. Indeed, aerodynamic elements were essential to the design, including the Air Curtain system that channels air around the front wheels, normally a place of significant wind drag.

One notable difference from the 3-Series sedan, says BMW, is the extra-large air intake in the lower fascia.“Its wide opening hints at the extra air required by the powerful engines and guides the eye around to the muscular flared wheel arches. The two vent surrounds on either side of the intake replicate the contours of the hexagonal headlight graphics to lend the front end an even wider and more sporting look.”

Perhaps the strongest feature of the Concept 4’s rear is the bumper, with a distinctive satin-nickel hued aluminum trim piece. The L-shaped lamps highlight the car’s shape at night. The taillights are unique to the 4-Series.

The BMW Concept 4-Series Coupe is completed by its liquid metal silver paint and 20-inch wheels and tires.

The production version of the BMW 4-Series Coupe is expected to start rolling into showrooms soon. Also on tap are a 4-Series Convertible, with an M4 and an X4 crossover set to follow.

If the relationship between BMW’s 5- and 6-Series lines holds true, expect to see a several thousand dollar premium for the new 4-Series models.