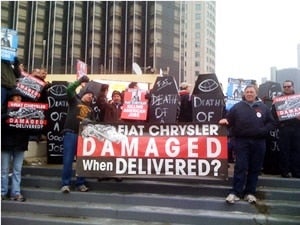 The Detroit Auto Show has been targeted by a number of protests in recent years.

The auto industry has bolstered the U.S. economy but the increase in automotive production is also feeding some discontent inside the auto plants and some of the frustration will be on display outside Cobo Center in Detroit as the North American International Auto Show gets underway this weekend.

Supporters of the Auto Workers Caravan, which emerged in 2009 as an alternative voice for members of the United Auto Workers Union, are planning to demonstrate outside Cobo Center on Sunday afternoon to protest what they describe as “deteriorating working conditions.”

Working in auto plants requires less heavy lifting than it did a generation ago but the pace of work is faster and blue-collar workers in both union and non-union plants are asked to multi-task at what amounts to a daunting pace.

“With all the talk about the successful turnaround of the Big Three, the spotlight needs to be turned on to the deteriorating working conditions auto-workers are facing. We were forced by the White House Auto Task Force to “sacrifice” during the bailout at GM and Chrysler,” the Autoworkers Caravan leaflet, calling for the demonstration noted.

“The global restructuring of the Detroit Three has been accomplished on the backs of working people to maximize profits—with no regard for workers or the environment. A restructuring of the auto industry is indeed necessary; but one using the know-how of workers to retool our plants and build what is necessary to stop global warming,” It added.

One of the most pressing issues, according to Ron Lare, a retired auto worker and long-time union activist from Dearborn, MI., is the growing use of second- and third-tier workers who are paid less than workers covered by traditional union contracts.

The new workers are paid anywhere from $9 to $15 per hour as new jobs are created at GM, Chrysler and Ford as the industry recovers, he said.

“The companies have wasted no time implementing an agenda that allows permanent “temporaries,” outsources in-plant jobs to companies paying as low as $9 an hour, and increases the pace of work. Management is no longer interested in having long-term employees. They prefer the maquiladora model, where one rarely lasts more than ten years,” the leaflet noted.

But the UAW also made substantial concessions on work rules.

“Concessions were incorporated into the current contracts with the Detroit Three. These included the elimination of COLA, time-and-a half only after 40 hours, loss of break time and holidays, expansion of two-tier and at GM and Chrysler pensioners losing dental and vision benefits. The pacts sent a signal to workers: don’t complain, just “be happy you have a job,” the leaflet set.

For many workers, the typical work week also has become a jumble of alternative schedules, Lare said.

“Workers are faced with the choice of discipline or not attending to after work responsibilities. Heartless managers have disciplined workers who left at the end of their posted shift rather than leave children stranded at child care providers,” the leaflet said.

The companies have wasted no time implementing an agenda that allows permanent “temporaries,” outsources in-plant jobs to companies paying as low as $9 an hour, and increases the pace of work. Management is no longer interested in having long-term employees. They prefer the maquiladora model, where one rarely lasts more than ten years.

The dissatisfied workers in Detroit also are reaching out to workers in other countries.

The Autoworkers Caravan, for example, has adopted the fight for severance packages for injured workers from a GM plant in Bogota, Columbia. Since last fall hey have held a series of demonstrations in front of GM headquarters and at the suburban home of on GM executive

“We stand with our sister and brother workers who face this aggressive management model in their countries. We understand that if corporations in other countries can fire workers after they become injured on the job, that same practice will be here soon. We express our solidarity with the more than 200 injured and fired GM workers from the Colmotores plant in Bogotá, Colombia. They have been denied workers’ compensation and the health care they need. We believe GM owes a debt to these workers,” the Caravan said in a new leaflet.