Unexpected unveiling offers a hint of replacement for best-selling F-Series. 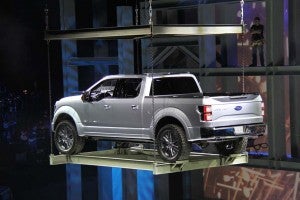 The surprise debut of the Ford Atlas concept pickup.

Ford Motor Co. stock took a sharp jump following the automaker’s unexpected unveiling of the Atlas Concept truck, a prototype offering a hint of what’s to come when the maker replaces its best-selling F-Series pickup in 2014.

In an appearance to an industry conference coinciding with the North American International Auto Show, Ford CEO Alan Mullaly marveled at the reaction to the preview.  The unveiling of the Atlas had been whispered about but unconfirmed by the maker until the huge silver truck descended from the ceiling of Detroit’s Joe Louis Arena.

“How about that,” proclaimed Mulally in an off-the-cuff remark following  his speech to the Automotive News World Congress. By the time the NY Stock Exchange closed, Ford common was up 31 cents, or 2.22%, for the day, to $14.30.

The market had a more mixed response during after-hours trading to news that rival General Motors would reinstate a dividend on its preferred stock but not common shares, which GM revealed after the NYSE shut down for the day. But prior to the market close, the giant maker had gained 27 cents, reaching $30.60, its best close since mid-2011.

The domestic auto has had a good week so far, General Motors, Chrysler and Ford also scoring strong reviews for new products introduced at the Detroit Auto Show. But Ford’s most upbeat move was the unveiling of the Atlas.  It came as something of a counter-measure to this week’s debut of the new Chevrolet Silverado pickup and word that Chrysler’s full-size Ram 1500 had been named North American Truck of the Year by a jury of 49 U.S. and Canadian journalists.

(For more on the Truck of the Year announcement, Click Here.)

The Atlas Concept was just one of a number of models Ford revealed at the auto show.  It unveiled several other new trucks, as well as the new Lincoln MKC compact crossover.  All were developed as part of Mulally’s One Ford plan, which is designed to share common vehicle platforms in markets around the world.

But few products come close to having the bottom line impact of the F-Series.  So, Ford has a lot at risk if it can’t answer back as its competitors update their full-size offerings. Its F-Series line has led the truck market for 36 years, which in itself is a remarkable record, and Mulally made it clear Ford isn’t about to relinquish its edge.

Analysts are clearly looking at the potential of an upturn in the pickup market this year, which will clearly benefit companies that depend on truck sales as much as Ford and GM.

The good news is that an upturn in housing could benefit all three of the Detroit makers, which collectively dominate the pickup market despite the best efforts of their import rivals, Adam Jonas, a managing director of Morgan Stanley told the conference.

During his speech, Mulallay said the biggest challenge facing Ford right now is the need to increase capacity. “Going forward this is going to be the first time in years we’ve raised production,” he said. Analysts expect the U.S. market to grow by 8% to 10% in 2013 as the economy continues to expand.

Mulally said he is satisfied the One Ford operating philosophy has helped improve quality despite the problems that led to four separate recalls of the new Ford Escape.

Mulally also recounted during his speech that when he first came to Ford people were surprised to learn he drove a Lexus. “I drove because it was the finest car in the world,” he said.

Now, however, you’re more likely to find him in the newly redesigned 2013 Lincoln MKZ sedan. “It is a wonderful luxury vehicle,” he said.