The revised Acura NSX prototype is slightly longer and wider than the 2012 version - but maintains the same basic proportions.

The once and future Acura NSX has taken a big leap closer to returning to production, the Honda luxury division revealing a second prototype version of the supercar during a preview at the North American International Auto Show in Detroit.

The original Acura was a high-profile flagship for Acura in its first incarnation, but the maker spent years struggling to find a strategy for bringing it back into production before revealing a distinctive new concept car at last year’s Detroit Auto Show.

That prototype was little more than a mock-up, but the one on display at Detroit’s Cobo Hall on the Acura stand for the new several weeks is a running prototype, albeit still not ready for prime time. 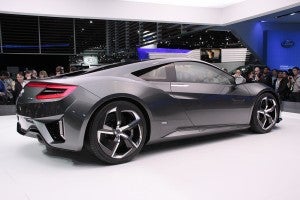 The production NSX will be powered by a hybrid version of Acura's Super-Handling All-Wheel-Drive.

The 2013 take on the NSX concept is slightly longer and wider than the earlier version, he revealed, and gets exterior details, such as air scoops and dams that are closer to production intent, Accavitti explained.

Under the hood is a version of the sport-hybrid powertrain that the NSX will use when it goes back into production, meanwhile.

The original 2-seater used a high-tech V-6 and Acura toyed with a variety of alternatives, including a high-power V-10 before settling on its current strategy. It will use a unique three-motor hybrid, two on the front axle and one on the rear, which will also draw power from a turbocharged V-6.  The layout will allow aggressive torque vectoring, different amounts of energy directed to each of the front wheels to improve the way it steers through a cornering. 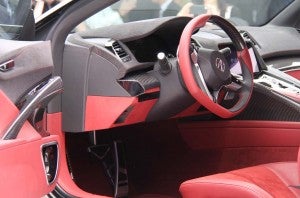 "One possible direction" for the NSX interior.

As for the suede, leather and chrome interior shown on the 2013 Detroit Auto Show prototype, think of it as “one possible direction” the maker may go once it gets the NSX into production, explained chief designer Jon Ikeda.

The race track-ready steering wheel and paddle shifters are intended to minimize the distractions on a driver pushing a supercar to “the limit,” Ikeda suggested. And there are a pair of large LCD screens, including one in the primary gauge cluster that can be reconfigured to the driver’s specifications.

Don’t be surprised to see another iteration of the Acura NSX theme at the next Detroit show, officials indicated. But by the time the supercar returns in 2015, said Accavitti, it should be in production form.