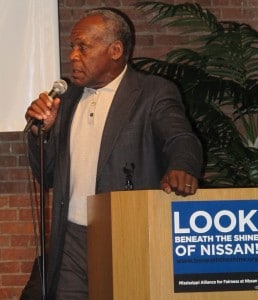 Actor and activist Danny Glover aims to lend some star power to the protest.

Actor Danny Glover spoke at a demonstration outside the North American International Auto Show today, but attendance was sparse, so leaders of the protest planned to try again this afternoon.

The group is protesting what they allege to be the poor treatment of workers at the Nissan plant in Canton, Miss.

The protest is paired with an organizing drive launched last spring at Canton by the United Auto Workers union which has struggled for decades to try to represent the growing number of foreign-owned “transplant” assembly plants in the U.S. The UAW is laying the groundwork to line up community support for a vote among the plants 5,000 production workers and has reactivated an old alliance with civil rights activists in the Mississippi Delta.

“With Nissan, you have to look beneath the shine. Nissan builds great vehicles, but the company should respect the rights and dignity of its Mississippi workforce,” the Rev. Isiac Jackson, president of the General Missionary Baptist State Convention of Mississippi, said in a statement released Friday.

“The UAW is glad to have a partner organization that is standing up for Nissan workers. …. Workers have had to endure months of meetings during work time where they only hear the employer’s anti-union views.”

Glover has long been active in Civil Rights and liberal causes and has also lent his voice to the pro-union campaign at Nissan.

The union also has been courting Rep. Bennie Thompson (D-Miss.), an influential African-American Congressman who has traditionally been friendly to Nissan.

Last week, members of UAW Local 2402 at General Motors in Brandon, Miss., joined Congressman Bennie, Rev. Jackson, who serves as chair of the Mississippi Alliance for Fairness at Nissan, and other Mississippi leaders for a joint General Motors/UAW event in which a Chevrolet Express van was presented to the G.V. Sonny Montgomery Veterans Administration Medical Center in Jackson, Miss.

UAW Local 2402 has been representing Mississippi workers since 1999, and the event gave the union an opportunity to highlight its struggle with Nissan.

“Unlike many companies in Mississippi, GM does not pay us less than it does workers in the North,” said Local 2402 member Garry Davis. “GM does good in both the community and with its workers,” he noted.

It is unclear if and when the UAW might convince workers at the Nissan plant in Canton to actually call for an organizing vote under federal law – but Nissan officials are confident they could easily win an election.

“The allegations being made by the UAW against Nissan are unfounded,” said the maker’s chief U.S. spokesman David Reuter, who noted Nissan has never had a lay off during its years of operations and the jobs are considered some of the most secure in the state of Mississippi. It will, in fact, add more workers when the Canton plant begins production of the next-generation Murano crossover next year.

“Nissan employees in Canton enjoy jobs that are among the most secure in Mississippi and offer some of the highest manufacturing wages in the state, strong benefits, a working environment that exceeds industry standards and an open dialogue based on transparency and mutual respect,” countered Reuter.

In 2001, Nissan beat back a UAW organizing drive at its plant in Smyrna, Tennessee. after Nissan chief executive officer Carlos Ghosn personally intervened by warning the plant might close if it went union.

Organizers claim the maker is again pressuring workers at Canton to resist the UAW’s overtures. They are demanding what the UAW describes as a level playing field, which means the company would not mount an anti-union campaign during the election — something non-union automakers in the South have been loath to do.

Union officials have said they sense an opening at the Canton plant because Nissan has moved ahead to implement a two-tier employment system. Employees recently hired for a second shift are temporary employees recruited by an outside contractor rather than full-time Nissan employees. But Nissan may scuttle that by making the new workers full-time employees, as well.