But November demand could surge as the Eastern Seaboard dries out. 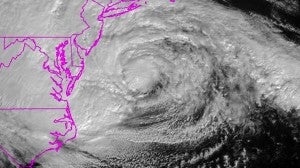 Mother Nature overwhelms what had been a strong October for the US auto industry.

Hurricane Sandy is taking the steam out of what was on track to be a strong October for U.S. car sales.

The still-massive storm shut dealerships across New England and the mid-Atlantic states, including major metropolitan areas such as New York, Washington D.C. Baltimore and Philadelphia. And heavy winds, rain and storm continue impacting business as far west as Ohio, Michigan and beyond.

Prior to the wicked and deadly storm, analysts had expected October sales to increase by roughly 11.5 % from October 2011. Before the storm warnings went up, True Car.com, a source of pricing information for new car buyers, estimated October 2012 would see a Seasonally Adjusted Annualized Rate, or SAAR, of 14.9 million new vehicles, up from 13.3 million in October 2011 — though down very slightly from the 14.94-million-unit SAAR of September 2012.

While October is likely to remain strong, Sandy clearly will result in sales numbers falling short of those earlier expectations.  But the impact isn’t likely to last long.

“New car sales are on automatic pilot. October was a robust start to Q4 sales with most manufacturers posting double-digit gains while continuing to lower incentives spending,” said Jesse Toprak, senior analyst at TrueCar.com. “We expect this recovery momentum to continue into the next year, with 2013 sales reaching 15.5 million units.”

The forecasted selling rate in October is the second consecutive month above 12 million units, the first time that has occurred since April and May 2008. Retail transactions are the most accurate measurement of true underlying consumer demand for new vehicles, according to J.D. Power & Associates.

“Each month, we’re seeing stronger signs of a healthy market, not only in terms of sales volumes, but also in dealer inventories, transaction prices and incentive levels,” he said.

Steadily declining incentives are a strong sign of recovery, analysts suggest.  Another is the industry’s shift in focus from fleet to retail customers. Fleet and rental sales are expected to make up 18.1 % of total industry sales in October 2012, according to True Car.  A number of manufacturers, including Hyundai and Toyota, are now below 10%, the makers report.

With more than 5 million customers reportedly without power a day after Superstorm Sandy made landfill near Atlantic City, it remains to be seen how quickly the East Coast dries out and mountainous areas to the west dig out from blizzard levels of snow. The impact is likely to still be felt in November, observers warn.

But, at least for the auto industry, there could be a positive side to the disaster in that floodwaters likely have destroyed many vehicles that will now have to be junked and replaced.