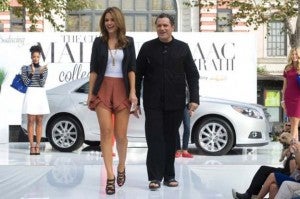 Isaac Mizrahi teams up with Chevrolet.

Return Of The Fashion Designers?

Years ago Lincoln used the famous ladies haute courtier Bill Blass was arguably the first fashionista to create the interior of a new vehicle. But that long-running association ended some years back, as did Chrysler’s ties to Nolan Miller, noted entertainment designer for celebs, had a run at creating a few runway gowns and the interior of a Dodge Dynasty based on the television hit of the ‘80’s, Dynasty.

So, in recent years, most makers have had minimal involvement in the fashion world but for the occasional high-profile event, over linked to the likes of an Oscar or Emmy ceremony.  But that’ beginning to change and the fashion world is forming new links to the auto industry. 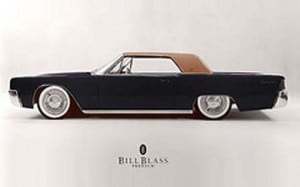 There have been special edition vehicles from other manufacturers with borrowed identity from sports, camping and other industries as well as fashions and accessories based on the car brand’s themselves – think Porsche, Mercedes-Benz, Ferrari, etc. – though consumer acceptance and distribution has been mixed, at best, until recently.

Fiat, however, had a great publicity success with a special Gucci edition 500 last fall. This week Chevrolet announced a collection of six women’s ready to wear fashions and accessories created by Isaac Mizrahi, whom Chevy called “the  Iconic fashion designer,” all inspired by the all-new 2013 Chevrolet Malibu midsize sedan. The new items range in price from $110 to $298 and have very limited national distribution through traditional retailers. Recalling personal experience in the schemata (NewYork-eze for ladies fashions) I have but one word to say: “Oy.” Followed by, “good luck.”

Chrysler has just announced the retention of noted designer John Varvatos who was born in Detroit to create a special limited edition Chrysler 300. Brilliant association. Couldn’t have been a better fit for the men’s designer known for this unique collections. To me this is literally a bespoke fit of designer and car brand. Click Here for the new commercial. 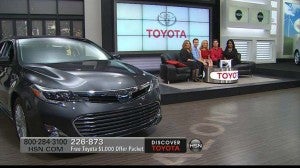 Unless you are a 24/7 television viewer the initials HSN probably doesn’t mean much to you, but to almost 5 million viewers, 87% of them women, the acronym means the Home Shopping Network. This is the interactive on your-own-TV-set mall home of a veritable treasure chest of big screen, jewelry, shoes, wear women’s apparel, appliances, computers, beauty aids among other items and as of last Sunday … Toyota’s. Toyota’s? Yes, Toyota’s.

Dial flipping last Sunday between so-so NFL games the program guide said, ‘DiscoverToyota’.  Had to be a mistake, but it was not. This, indeed, was a special live one hour program featuring the Toyota Prius’. This was more than an infomercial, the content was factual, accurate and aimed to the women who watch HSN and spend millions through the network — and hold the purse strings on many family purchases.  There was a special offer, too, based on registering by phone or on a Toyota-HSN micro site: if the viewer could prove they bought or leased a Prius within ninety days they’d receive a $1,000 HSN Kash Card or a $1,000 gas card.

I thought this was a brilliant ambush marketing tactic.

Upon checking I learned Toyota was the first automotive brand in 34 years to use HSN as an outlet. The auto brand and HSN were brought together by a “Third party,” noted Steven Curtis of Toyota’s PR staff, “After a few months of negotiations.” HSN is a new type of retailer who expects, make that demands, a percentage of the sale through its exclusive cable network. If they got a cut of the sale, that would make HSN a dealer, right? And that’s illegal in most states, also right, right? Understandably, Curtis declined to disclose any of the financial arrangements.

The brief, as described was brief, “Our chief aim was to improve Toyota’s opinion and familiarity among the HSN audience as well as demystify Hybrids. We believe our post survey will prove we did just that. With that said, results (consumers responding to the CTA) from Sunday’s broadcast exceeded our wildest expectations. Following the initial broadcast, we had already exceeded our expectations for information distribution for the full day. The HSN programs were in-part to support the work of Toyota dealers around the county,” Curtis further explained.

Jay Penske, yes that Penske, this week agreed to buy Variety magazine, the107-year-old bible of show biz adding to his collection of entertainment websites for a reported $25 million.  A move that made news in the media, entertainment and show biz industries because at one time the venerable publication was valued at significantly more.  Chip off the block.

An Old Media for a New Buyer?

Lincoln has launched a stealth marketing program to carefully selected consumers to come test drive pre-production models of the redesigned 2013 Lincoln MKZ according to a few reports that were verified by Lincoln communications.

What is puzzling is the use of post cards – arty black and white post cards at that — to reach the younger, affluent potential buyers of the new vehicle. You remember post cards don’t you? They were the old family and friend communication medium of “having fun wish you were here” post cards that predate email and texting. Is this a strange medium to reach younger more hip buyers? Hell, I am part of the over 60+ generation and would find it, at best, odd, if I received a post card to an exclusive event.  Wouldn’t you?

Not strange is the idea of semi-exclusive appeal to a group that thrives on owning the first of anything and getting privileged and pampered attention wherever they shop, dine or stay. It is a good strategy that goes up against the Euro-Three-luxe brands and the resurgent Lexus brand which pioneered customer care in the premium car marketplace.  Lincoln’s program, called Exclusive Access Tours, will be conducted in nine major luxury markets.  Stay tuned for further updates.

How Will a New York Icon Play in Houston?

In a departure from its traditional advertising creative platforms, Volvo signed Jeremy Lin, a Harvard grad and NY Knicks favorite now with the NBA Houston Rockets, to a two year endorsement package.  Lin is featured in a new commercial called The Unexpected Ones that is airing among the usual networks now. Click Here to take a look.