Ferrari takes to the rails, Nissan gets a Bolt from Usain, inside Google and more. 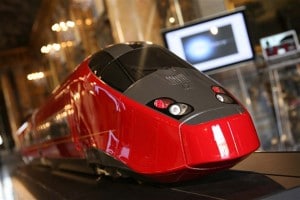 Yes, it's even faster than a Ferrari.

It might have been a slow week for the automotive marketing world if it weren’t for the world’s fastest man, London Olympics star Usain Bolt showing up in Tokyo this time for a tie-up with Nissan — more of that to follow.

In fact, endorsements were the dominant news, Martha Stewart linking up with Toyota while Kia moved from Hamsters to a jazzy Batman Optima at New York’s Comic Com and Chrysler revealed plans to pair up with Motown – and the hip-hop world.  But here’s a look at some other developments over the past week:

Travelers to Italy rejoice. For a few hundred Euros you can now enjoy a Ferrari on a route from Naples, Rome, Florence, Bologna and Milan on the world’s fastest railroad known as Nuovo Trasporto Viaggiatori  or NTV. 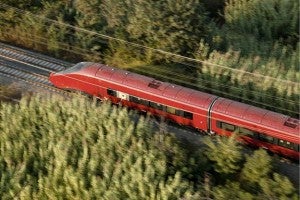 The new Ferrari train is privately owned, with the automaker's CEO a key investor.

The new line, launched a few months ago, is backed by the Italian business rockstar Luca Cordero di Montezemolo, Ferrari’s chairman, and Diego Della Valle, owner of Todd’s shoes along with other investors for $1,8 billion. NTV is the first private operator on the Italian high speed rail network and the first operator in the world to use the new Alstom AGV train, the train currently holds the high speed train record. With its fleet of Ferrari red painted (what else?) 25 trains. Italo travels with a rich entertainment experiences and services, in comfort and especially designed for the different needs of all types of travelers at 360 kmph. Like airplanes there are three classes of service each with its own amenities and prices.

The NTV may set a new standard in rail travel. There is no locomotive. Two highly advanced technological innovations are what make the heart of the train: the highly articulated architecture and the distributed traction, which, thanks to the positioning of the engines on the undercarriage, makes the best possible use of the train’s power. The distribution of the engine system throughout the entire train, rather than in locomotives at the front and the end, have made it possible to eliminate the locomotives and free up valuable space for passengers. The combination of the two innovations eliminates much of the onboard vibration and noise, optimizing aerodynamics, guaranteeing more effective safety and reducing maintenance costs by 15%. Use of innovative materials along with the modern traction systems and the above technical solutions result in an overall lighter mass of Italo reducing energy consumption by 10%.

A look under Google’s hood

Ever wonder how the Internet’s most popular search site – and auto marketers favorite — gets so much information in milliseconds to billions, yes billions of visitors every day? Media Post Publications has provided an interesting overview.

First the numbers: Google’s multibillion-dollar infrastructure allows it to index 20 billion Web pages daily. So far this year, it has processed more than 30 trillion unique URLs on the Web, up from 1 trillion in 2008. Its servers receive more than 3 billion search queries daily or 100 billion a month. Google also supports 425 million Gmail users, according to a spokesperson. Those sums are only search queries and ads, which doesn’t include videos. On YouTube, Google estimates 48 hours of video are uploaded every minute, resulting in nearly eight years of content uploaded daily. Videos take more space to process content, stream and store compared with text.

The high-resolution color photos from inside some of the eight data centers highlight those in the U.S., Belgium and Finland. Google is also building data centers in Hong Kong, Taiwan, Singapore and Chile. Hot buttons on the site highlight specific details about the center, such as “a sustainable data center starts with making our computers use as little electricity as possible.” It’s a fascinating look, with some stunning photos, under the hood. Click Here  for more.

How a cat sells Toyota’s in New Zealand

Saatchi & Saatchi created this fun to watch commercial for the islanders. Based on personal experience, unlike dogs, cats don’t like cars. Except if it’s the 2013 Toyota Corolla. And if a cat happens to sit in one, like the furry protagonist of this commercial out of Saatchi & Saatchi New Zealand does, the singularity and focus of its feline mind will ensure it will do anything it takes to sit in one again. The funny online and television spot launched last weekend. Click Here to check it out.

Based on a recent Wall Street Journal article American’s are turning off their television sets. Television viewing, the Journal noted,  of both cable and broadcast networks among adults under age 50 fell an average of 15% of their viewers in the 18-49 demographic compared with the first two weeks of last year.

In the Villages, a gigantic retirement development near Orlando, Florida (of sometimes dubious distinction) the preferred mode of transportation has four wheels, but it is not a car. Golf carts, thousands of golf carts rove, roam and rule. Some are standard but as this AARP video details the auto lovers zeal for modification has interesting modifications. Click Here to check them out.

Add Aston Martin, the venerable Britmobile, to the the auto companies mentioned last week who are using fashion as an accessory of ownership. The stunning Virage Volante has a coordinated John Lobb – bespoke and other footwear – driving show called the Winner sport. The ultimate driving shoe (sorry BMW) noted the website has the look of a John Lobb shoe but the feel and comfort of a sneaker with it’s a special sole. The streamlined design is crafted of supple Velveteen calf, with eyelets that match the vehicles color and emulates the leather stitching too. It’s available in eight colors to coordinate perfectly with the vehicle and it’s just $970 or for Anglophiles £601.11, Store information at JohnLobb.com.

Before we wrap up, a bit more on those endorsement deals we opened with. The smallest of the American automakers has been making much of its Detroit heritage since emerging from bankruptcy in 2009 and now Chrysler will sound off with two special-edition models. One, a hip-hop version of the compact Chrysler 200, will celebrate the upcoming 10th anniversary of the release of the groundbreaking film, “8 Mile.” And, you may recall, the automaker had a major success at the 2011 Super Bowl by landing hip-hopper Eminem — that film’s star — for a unique, 2-minute commercial. Meanwhile, Chrysler is also planning a special edition of the bigger 300 sedan to celebrate its involvement with Motown: The Musical, which is soon set to debut on Broadway. For more on these special editions, Click Here. 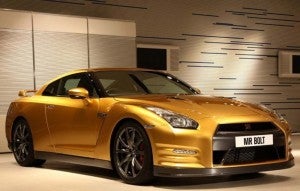 Usain Bolt will auction off this Nissan GT-R for charity.

And finally, Nissan’s global marketing chief Simon Sproule admits that sometimes you’re not smart, you’re just lucky. Whatever the case, Nissan wound up landing a deal with Usain Bolt, the world’s fastest man, just weeks before he landed three wins medals at last summer’s London Olympics. The automaker has handed Bolt another gold – this in the form of a golden-colored Nissan GT-R that will be auctioned off for the runner’s charity. Meanwhile, as TheDetroitBureau.com revealed this week, Nissan is also planning to develop a special-edition Usain Bolt GT-R that it hopes to release in limited numbers next year. Click Here for the complete story.