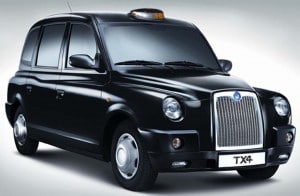 They’re nearly as much an icon of the British capital as Big Ben or the Tower Bridge. And they’re far more ubiquitous. But the familiar London Black Cab may now be an endangered species.

The only company still producing the roomy little taxi has been forced into the British equivalent of Chapter 11 bankruptcy – and it’s far from certain whether it will survive without finding a white knight.

The problem is that competition is increasing even as the European recession drives down overall demand for new taxis. Five years ago, Manganese Bronze, the firm that also operates as The London Taxi Co., was selling about 3,000 of the hacks annually. Sales tumbled by half in 2011 and have slipped even further this year.

That has created a $24 million financial hole for the company which has been producing cabs for the British market since 1948.  Manganese Bronze hasn’t had a profit in four years and hasn’t been able to refinance its debts.  It warns it will go out of business if it can’t find a buyer.

So far, none has appeared, though there has been some speculation in the UK that a rescue might come from one of the emerging markets.  Indeed, Indian automaker Tata snapped up both Jaguar and Land Rover when they were put on the auction block by former owner Ford Motor Co. a few years back.  There is speculation the Chinese might be interested.

Ambitious manufacturers from the People’s Republic have made a number of attempts to acquire failing automotive brands like Britain’s Rover and Sweden’s Saab – a Chinese-Japanese consortium ultimately bought up remnants of the latter after it went insolvent last year. In fact, Geely, which bought Volvo from Ford last year, already holds a 20% stake in Manganese Bronze.

“What we’re hoping,” taxi trade group chief Johnathon Myers told Marketplace, “is that they will buy the company, and put a Volvo engine in it.”

For his part, however, the taxi company’s CEO John Russell says he would prefer to be bailed out by an American investor.

“We have tremendous interest in taking the vehicle to America,” he told the radio news service. “And if we could find a partner that could fund the changes that would make the vehicle legal in the U.S., I think we would open up a massive market.”

In fact, it would be just the latest attempt to bring the cab over to the United States.  Several earlier bids to cross the Atlantic failed. And observers question whether such a move would work now — in part because of the cost of converting the taxis to meet US safety and emissions standards.

The classic “black cab” familiar to Londoners does have a number of advantages. Despite its size it is reasonably fuel efficient – essential in a market where “petrol” costs about US$9 a gallon. It is roomy and comfortable, with fold-down seats that provide more room than traditional sedans of the same size.

One reason for the popularity of the black cab is its tight turning radius of just 25 feet. That’s useful in an ancient city like London but also reflects what has been called the “Savoy Test,” the need to navigate the tight drive up to the door of the nearly as iconic Savoy Hotel and then turn around.

But Manganese Bronze missed what might have been its biggest opportunity to gain an American foothold when New York officials chose Nissan to provide the Big Apple’s so-called Taxi of Tomorrow. Based on the Japanese maker’s NV200 van, it will begin a slow phase-in starting next year.  By 2018, NY taxi regulators anticipate Nissan will supply at least 13,000 to the city’s cab fleet operators at a minimum of around $30,000 each.

The black cab has been as much a fixture of British culture as it is the primary form of transportation for many Londoners.  It has appeared in countless films over the decades, including the James Bond flicks. There was also an appearance in the final ceremonies of this year’s London Olympics.

In use since 1907, the latest incarnation of the black cab has plenty of fans including Arnold Schwarzenegger, who had one shipped back to California. Model Kate Moss owns one and so does royal consort Prince Phillip.

But visitors to London will likely note that when they hail a cab, these days, there’s a good chance they might instead wind up in a stripped-down Mercedes-Benz, a version of the German maker’s E-Class popular in much of the rest of Europe.

Barring a last-minute rescue, at least one distinct bit of London’s unique identity might soon fall victim to this globalization.