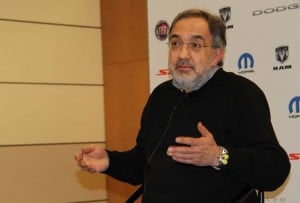 Chrysler CEO Sergio Marchionne may have wanted to sit out the election but he's been pulled into the fray.

Despite declaring his desire to stay out of this year’s presidential battle, Chrysler CEO Sergio Marchionne has found himself drawn into the fray as he responded to a series of comments and political ads by GOP contender Mitt Romney, which he called “inaccurate.”

The Italian-born Marchionne made it clear in a note sent to Chrysler employees that statements and advertising by Republican presidential candidate Mitt Romney suggesting the company was moving Jeep production from its assembly complex in Toledo, Ohio to China was simply not true.

“Chrysler Group’s production plans for the Jeep brand have become the focus of public debate,” the Chrysler CEO said in the statement that was also released to the media.

The domestic auto industry has become a central topic of debate between President Barack Obama, who approved the largest portion of an $84 billion government bailout of Chrysler and General Motors, and his Republican rival – Romney arguing against the rescue effort but also trying to claim he helped to save the two makers by demanding a “structured” bankruptcy.

For his part, Marchionne has tried to sidestep the ongoing debate, and in his note he continued to insist he wanted to avoid getting involved in politics, insisting, “I’m the furthest things from a politician. I manufacture and sell car.”

But the latest flap over the Detroit makers has become a major campaign issue as candidates Obama and Romney square off over Ohio, a state considered by many likely to help determine who will occupy the White House after next January’s inauguration.

Obama’s support of the 2009 auto bailout has been central to his effort to line up support in Ohio, particularly among blue-collar workers.

“I feel obliged to unambiguously restate our position: Jeep production will not be moved from the United States to China,” he continued. “Jeep assembly lines will remain in operation in the United States and will constitute the backbone of the brand. … It is inaccurate to suggest anything different.”

In contradicting the assertions in the Republican ads, Marchionne said North American production was critical to reaching Chrysler’s goal of selling 800,000 Jeep vehicles by 2014.

“In fact, U.S. production of our Jeep models has nearly tripled since 2009 in order to keep up with global demand,” he said.

The production of Jeep models is expected to be up 185% this year and, if anything, Chrysler has rapidly expanded production at the flagship Jeep plant in Detroit with the addition of second and third shifts since the 2009 Chrysler bailout.

Chrysler does plan to produce Jeeps in China but only for domestic market sales, the maker has said. Indeed, virtually every major automaker now operates production facilities in China – critical to avoid hefty import duties.

The announcement by Chrysler that it would build Chinese Jeeps in that country was incorrectly reported, initially, and despite a later correction in the media, the Romney campaign has continued to run with the inaccurate information.

In his statement, Marchionne said, “We also are investing to improve and expand our entire U.S. operations, including our Jeep facilities. The numbers tell the story. We will invest more than $1.7 billion to develop and produce the next generation Jeep SUV, the successor of the Jeep Liberty — including $500 million directly to tool and expand our Toledo Assembly Complex and will be adding about 1,100 jobs on a second shift by 2013.”

“At our Jefferson North Assembly Plant, where we build the Jeep Grand Cherokee, we have created 2,000 jobs since June 2009 and have invested more than $1.8 billion.”

Marchionne said that with the increase in demand for Chrysler vehicles, especially Jeep branded vehicles, more than 11,200 U.S. jobs have been added since 2009.

Plants producing Jeep branded vehicles alone have seen the number of people invested in the success of the Jeep brand grow to more than 9,300 hourly jobs from 4,700. This will increase by an additional 1,100 as the Liberty successor, which will be produced in Toledo, is introduced for global distribution in the second quarter of 2013.

“We are working to establish a global enterprise and previously announced our intent to return Jeep production to China, the world’s largest auto market, in order to satisfy local market demand, which would not otherwise be accessible,” he said. “Chrysler Group is interested in expanding the customer base for our award-winning Jeep vehicles, which can only be done by establishing local production. This will ultimately help bolster the Jeep brand, and solidify the resilience of U.S. jobs.”

He continued, “Jeep is one of our truly global brands with uniquely American roots. This will never change. So much so that we committed that the iconic Wrangler nameplate, currently produced in our Toledo, Ohio plant, will never see full production outside the United States.”

Ironically, it was American Motors, the company once headed by Romney’s father George, that began building Jeeps in China in the early 1980s. Chrysler took over the venture in 1987 when it acquired AMC.

After Chrysler’s 1998 merger with Daimler-Benz, what was the Beijing Jeep venture became the center for the launch of production of Mercedes-Benz vehicles in China.

After Daimler sold Chrysler to Cerberus in 2007, the German automaker retained its ownership of the Beijing Jeep venture, which effectively shut Chrysler out of the China, which is now the largest automotive market in the world.

There has so far been no word from the Romney campaign as to whether they will correct or otherwise stop using the inaccurate information about Chrysler’s plans for Jeep.