Finally, a real challenger to Prius? 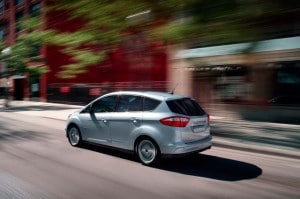 Ford hopes the distinctively designed C-Max Hybrid can challenge the dominance of the Toyota Prius.

Toyota has ruled the hybrid segment since the original Prius rolled onto the U.S. market a dozen years ago — and up until now Ford Motor Co. has trailed a distant second with its well-regarded Escape Hybrid.

But Ford is changing gears, having retired the gas-electric version of the Escape in favor of a new version of the updated crossover now powered by the maker’s well-received EcoBoost drivetrain. That doesn’t mean Ford is walking away from the battery-car market.  Far from it.  If anything, it is rolling out an assortment of hybrids and even more advanced vehicles that, it hopes, will gives the Detroit maker a chance to challenge Toyota’s perceived leadership in green automotive technology.

Key to Ford’s bid to reduce Toyota’s dominance is the 2013 C-MAX hybrid, which comes with a five-door body style popular in Europe — and a completely new hybrid powertrain under the hood.  The C-Max is being positioned as a direct challenge to Prius and will be Ford’s first model line offered only with hybrid or plug-in hybrid power. 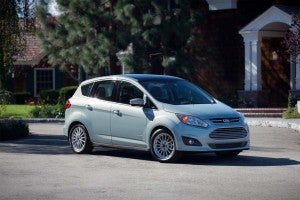 The Ford C-Max will be offered only with a choice of hybrid or plug-in drivetrains.

While not quite as quirky looking as the familiar Toyota hybrid, Ford is betting the C-Max will become equally distinctive rolling down the road, a sort of rolling billboard for its battery car program.

The conventional hybrid will be first to market this autumn.  Having driven all three existing versions of the Toyota Prius, I found the C-MAX quieter, quicker, easier to handle and more refined.

In addition, Ford’s hybrid powertrain is no mere copy of Toyota’s as some Prius fans might suggest. Ford engineers have collected more than 500 patents for their new hybrid drive and their handiwork shows in the smooth shifts and quiet ride that offers a sharp contrast to the quirky, jerky ride delivered by Prius, which sometimes seems like it can’t quite get out of its own way.

Moreover, while the Prius has always delivered stellar fuel economy numbers – I recently got 50 miles per gallon during while testing the smallest member of the family, the Prius C – Ford’s 2013 C-MAX seems ready for the challenge. 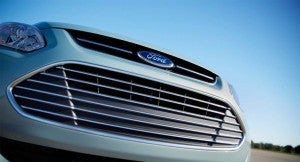 The nose of the new C-Max borrows the maker's new signature trapezoidal grille.

The C-MAX Hybrid is now officially EPA-certified at 47 miles per gallon city, 47 mpg highway and 47 mpg combined, which Ford notes is 7 mpg better than the comparably sized Prius v.

In addition, the C-MAX handles better, has better acceleration and stop neatly while putting energy back into the battery.

In addition, the C-MAX provides buyers a nicer interior for the $26,000 starting price, which is about $1,300 less than Prius v. However, the fully-equipped C-MAX with desirable options such as the power lift gate, MyFord Touch with navigation, reverse sensing system and panoramic sunroof, quickly pushes the price tax past $30,000.

But the interior trim and materials have been upgraded to match the price so that the C-MAX doesn’t feel like a cut-rate package where the cabin has been cheapened to cover the cost of the expensive hybrid technology – as critics often fault Toyota for. 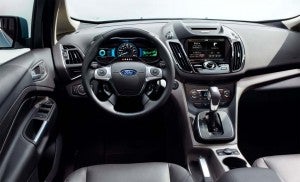 The interior of the Ford C-Max has a more refined quality than the comparable Toyota Prius V.

In addition, Ford has made the cabin quieter and with the excess noise gone the hybrid system becomes virtually invisible — except when you calculate your fuel cost savings at the end of the month.

The power of the C-MAX Hybrid comes from the combination of a gasoline engine and a battery-driven electric motor that delivers “real car” performance and capability. The C-MAX also can reach 62 mph in EV mode and 188 net horsepower.  That’s a whopping 50 more horsepower than the Prius V – which only can manage up to about 25 mph in battery-only mode.

Ford engineers describe the new 2.0-liter Atkinson-cycle four-cylinder engine used in the C-Max Hybrid as the most advanced, non-turbocharged four-cylinder powertrain Ford has ever offered.

The C-MAX comes with features such as SmartGauge with EcoGuide – to help encourage motorists to maximize fuel economy by showing how driving behavior affects the vehicle’s efficiency — along with the optional active park assist and hands-free liftgate system – the latter first offered on the new 2013 Ford Escape. 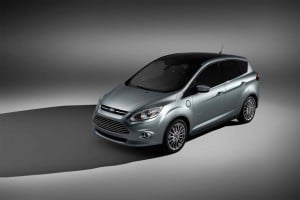 Ford will introduce a plug-in hybrid version, the C-Max Energi, later this year.

The C-MAX is a compact “people-mover” that can, in a pinch, carry five people. But while it’s relatively comfortable with two or three people, five could be a stretch, even with the relatively high roofline – 63.9 inches – offering ample interior space and flexibility.

For cargo, the C-MAX Hybrid has 60/40 split-fold rear seats. The seats easily fold flat with 52.6 cubic feet of space behind the first row and 24.5 cubic feet behind the second row.

For those who want to go even greener, the Ford C-MAX Energi plug-in hybrid is coming later this autumn.  It’s projected to deliver 550 miles of total range, including more than 20 miles in electric-only mode, about 50% more than the electric-only range of the Toyota Prius plug-in hybrid – though significantly less than the Chevrolet Volt’s 38 miles range.

It remains to be seen if the 2013 Ford C-Max can overcome the traction Toyota has garnered over a decade for Prius.  Collectively, the various members of the Japanese maker’s Prius “family” account for about half of total U.S. hybrid sales.  But if any competing product could shake the established order, Ford seems ready to give it a shot with its new battery-based people-mover.