Maker will retain Commonwealth, Manchester United deals – but may soon return to Facebook. 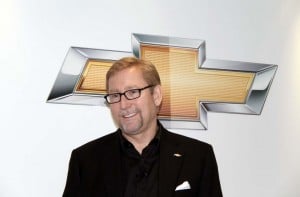 Gone but not forgotten, as most of Joel Ewanick's controversial moves will stand -- for now.

While the precise reason for General Motors’ decision to oust global marketing czar Joel Ewanick remains unclear there is no question that the executive radically shook things up during his two-year tenure at GM headquarters in Detroit’s Renaissance Center.

Among other things Ewanick abandoned a network of ad agencies GM worked with – some for more than half a century – walked away from the Super Bowl and Facebook but also inked massive deals with two of Europe’s most storied soccer teams. The bigger question is whether Ewanick’s interim successor, Alan Batey, will reverse some of those key decisions.

For the moment, a GM spokesman told TheDetroitBureau.com, that isn’t going to happen.  In fact, the day after news began to leak out about Ewanick’s ouster GM confirmed it had upgraded its ties to Manchester United, arguably the most popular soccer club in the world.  Initially, its Chevrolet brand would have gotten banner presence but now it will place its name on the team’s players jerseys starting in 2014, a move guaranteeing all the more visibility during ManUnited’s wide TV coverage.

The decision caught some by surprise as potential irregularities in the handling of the Manchester United deal has been suggested by insiders as the primary cause of the Ewanick’s forced exit.

According to spokesman Greg Martin, another key decision will remain in place.  Prior to Ewanick’s coming aboard, in May 2010, GM had already begun rethinking its ad agency strategy, a global hodgepodge that linked it to about 70 firms including Campbell-Ewald, a suburban Detroit giant that had been partnering with Chevrolet for the better part of a century.  Ewanick summarily cut the firm loose and began trimming back on other relationships.

Then, just months ago, he announced that GM would, wherever possible, pare back to a new team, dubbed Commonwealth, that would unite two erstwhile rivals, Goodby, Silverstein and Partners and McCann Erickson Worldwide.

Martin says Commonwealth will remain the agency of record for GM in the post-Ewanick era.

Following the executives hasty exit, GM appointed North American sales chief Alan Batey to fill his spot on an interim basis.  The maker was “lucky to have a deep bench” that it could draw on,the spokesman said in an interview.  That would suggest that Batey is the top candidate to fill the global marketing role on a permanent basis, though it is all but certain GM will first review all its options and at least consider some outsiders.

In the near-term, other decisions seem likely to stick, notably including Ewanick’s abandonment of the 2013 Super Bowl.  In a May news conference the former czar said the game has become far too expensive – at an estimated $4 million for a half-minute spot next year.  He said there was no plan to review the move and that appears to be the case, at least for 2013.

But one of Ewanick’s most high-profile actions was already being reconsidered even before his departure, its decision to pull $10 million in advertising from Facebook.  The announcement couldn’t have come at a worse time, days before the social media site’s ultimately flawed IPO Ewanick revealing that its advertising programs are ineffective.

Since then, top Facebook executives have taken their case all the way up to GM CEO Dan Akerson and insiders have hinted a change of heart might happen.  Indeed, even Ewanick had said, in May, it was a move he himself might revisit at some point.

One thing seems certain, GM will be carefully rethinking what it wants out of a global marketing chief.  Until recently, it seemed like Ewanick was the right man.  In mid-July, in fact, CEO Akerson had said the executive was doing a “good job” in his mode of “glass-breaker.”

But insiders say Ewanick had stepped on too many toes, not just by making some controversial decisions but also with a management style that tended to mercurial, with some reported fits of rage that were hard for colleagues and underlings to handle.

Perhaps more damaging were the actual results, a sharp decline in GM’s market share from 19.9% during the first half of 2011 to just 18.1% during the same period this year – despite the launch of critical new products such as the latest Chevrolet Malibu.

Industry watchers found spots like those filling the Olympics to be weak, at best.  Dealers, meanwhile, have complained that the Chevy ads for the new one-price policy can make them look sleazy.

If anything, the pressure will be on Batey – or a permanent successor – and the new Commonwealth team to deliver those more positive results.