F1’s Ecclestone may step in with rescue. 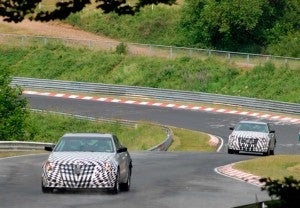 A pair of camouflaged Cadillacs undergoing testing on the Nurburgring's brutal Nordschliefe.

Short of Indy’s brickyard perhaps no race track in the world is as well-known as the German Nurburgring. But the challenging course could soon see its last race.

Dating back to the 1920s, the long and challenging circuit has been regularly used for a variety of motor sports events, such as Formula One but has become increasingly familiar to even non-racing fans because it has become the track of choice for testing by manufacturers such as Porsche, Ford and Cadillac – something they frequently note in commercials.

But the track’s management warns it is rapidly running out of cash and with the German government rejecting a requested $16 million bailout, the ‘Ring, as it’s frequently called, may be forced into insolvency.  A rescue is still possible, however, and Formula One boss Bernie Ecclestone, not a many known for having a charitable side, is offering to “do everything” he can to help the track survive.

“We will do everything that is commercially feasible,” the 81-year-old Ecclestone told the German weekly Auto Bild, suggesting that his F1 organization would “bear all costs” for the 2013 race though the quid-pro-quo is that it would “also claim all revenues.”

The question is whether Ecclestone’s offer is too little and would come too late.

The Nurburgring dates back to the mid-1920s as European racing began to move from the streets to more permanent tracks. Located about 40 miles south of Cologne, the track was built in the Eiffel mountains near the medieval castle of Nurburg.  More accurately, the tracks, as there were originally four of them, though the layouts have changed repeatedly over the decades.

It has been claimed that only Phil Hill, the first American to win the F1 world championship, ever was able to fully memorize the 100s of turns on the old Formula One circuit – which his rival, Scottish champion Jackie Stewart nicknamed “Green Hell.”

Today, there are two main circuits, the GP-Strecke, used for F1 and other major races, but a shortened version of the North Loop, or Nordschliefe, is still actively used for smaller races, testing and public events.  The Nurburgring allows motorists to pay a small fee and run the long track in just about anything they drive up in.

But the ‘Ring has gained a unique persona as a test track where all manner of new vehicles are put through their paces, such as the new Cadillac ATS – the maker referring to the German track as one of its “key testing grounds.”  Manufacturers as diverse as Porsche and Nissan routinely promote the lap times of vehicles like the 2012 911 and the 300Z.

Track managers began to dig their own hole, a few years back, when they attempted to turn the Nurburgring into something of a theme park, adding a shopping mall and rides like a roller coaster, among other things, which haven’t generated the anticipated revenues.

The track is seeking help and had hoped for a $16 million German bailout – which was recently vetoed by the European Union.  Alternative loan options are under study and a decision is expected by month’s end.

But without someone stepping in to bail the operation out, Kurt Beck, the governor of the local German state of Rhineland-Palatinate, warns there is a “high probability of insolvency at the end of the month due to a lack of liquidity.”