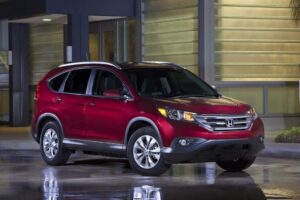 Customers paid more than ever for Honda products like the CR-V last month.

New vehicle sales looked strong in May as Chrysler Group LLC, Ford Motor Co., General Motors Co., Volkswagen Group and Nissan all reported double digit-sales increases for the month of May as it appears the industry will exceed 14 million units of sales this year.

The unexpectedly strong demand of the first five months of 2012 has led a number of makers to increase earlier forecasts – General Motors, for one raising its own figures to a high of 14.5 million.  But not everyone is quite so upbeat.  For now, at least, VW is holding to 13.9 million despite the fact that the maker last month had its own best May since 1973.

“We’re not ready to change our forecast,” said Jonathan Browning, CEO of Volkswagen Group of America, cautioning that there are plenty of economic uncertainties that could lead to a softening of demand during the second half of 2012.  Indeed, Browning noted there was “ebbing-and-flowing” in the marketplace during May, the month opening strong, softening notably and then ending with a big bang over the holiday weekend.

That was echoed by a report from CNW Marketing, which tracked unusually strong consumer traffic at showrooms across the country during the Memorial Day break, traditionally a high-demand weekend.

VW’s 28.4% gain was one of the biggest jumps so far reported – with several key makers, including Toyota and Honda, yet to report in.

Chrysler did even better, however, with sales jumping 30% last month, the maker calling that a sign that Americans remain determined to replace their aging cars despite the falling stock market and shaky consumer confidence.

Chrysler said it sold more than 150,000 cars and trucks in May, compared with 115,000 in the same month a year earlier. Chrysler brand sales soared 80%, while Jeep sales increased 24%.

One of the uncertainties in the market is what will happen with fuel prices falling after hitting a near-record peak in early April.  VW’s Browning said he expects that while that may encourage sales of bigger trucks in the short-term, most buyers are now watching out for the long-term and anticipate prices will once again start rising.

May saw some significant milestones for a number of makers, Chrysler continuing a string of above-industry-average gains, VW turning in a nearly four-decade sales record and GM scoring its best sales since August 2009 during the Cash for Clunkers program.

GM said overall May sales increased 11% year-over-year while retail volume was up 14%.  With the maker cutting back on fleet business, the retail portion of the mix was 70%. Fleet sales increased by only 3%. Buick and GMC both reported sales increases of 19% and Chevrolet was up 10%.

Sales of GM small and compact cars were up 16% in May versus a year ago, driven by the new Chevrolet Sonic, which had sales of 7,205 units, and the new Buick Verano, with 3,609 sales, which has increased sales every month since its launch.

“GM’s sales in May were the highest in almost three years and we are poised to keep delivering good news for the U.S. economy with one of the most aggressive new product offenses in our history,” said Don Johnson, vice president, U.S. Sales Operations.

Among the more encouraging signs for May was a general dip in incentives, according to several data tracking services.  In turn, consumers are are not just buying more cars, but they’re paying fuller prices.

“Toyota and Honda not only recovered from the last year’s dip in sales but also had their highest transaction prices ever in May, showing that they were able to recapture consumer interest in their products,” added Toprak, who analyzes data about automotive transactions.

Analysts expected total U.S. sales for May to rise almost 30% to 1.4 million cars and trucks, according to forecasts from industry analysts. They expect sales for 2012 to reach 14.5 million, up from 12.8 million last year.