Men (surprise!) admit to being the worst offenders. 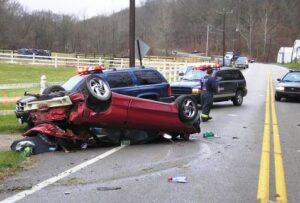 Government data reveals that while highway fatalities are declining, distracted driving deaths are up..

If you’ve ever texted while driving or sent out a Tweet, well, you aren’t alone.  In fact, you’re far from the minority, it seems.  A new Harris Poll reveals that more than four out of five motorists admit to making some sort of distracted driving behavior in a typical month.

Men, it turns out, are more likely to engage in this potentially dangerous behavior, according to the latest Harris AutoTechCast study, particularly when it comes to taking or making a phone call.  Younger motorists are more likely to do things like texting.

Some of the behaviors might not normally land on a list of dangerous activities, such as drinking a beverage, but the risky behaviors begin to add up – to an average 37 different distracted driving activities over the last month, according to Harris Interactive, which conducted the poll.

Most common on the list is making to taking a call, something that the typical driver does 11 times a month, with motorists drinking beverages behind the wheel eight times, texting five times and e-mailing three times.

Men were more likely to use their cellphones, 12 times a month compared to 10 for women.  Motorists between 18 and 34 were far more likely, on the whole, to engage in distracted driving behaviors, however, about 57 times a month.

“While ideally these drivers should practice fewer of these distracted driving habits,” stated Mike Chadsey, Vice President, Automotive Solutions Consultant, Harris Interactive, “it is also comforting to know that this distracted driving group is aware of the importance of safety features and is actively considering them for their next vehicle purchase.”

When it comes to gaining access to new infotainment technologies, motorists want to be able to get there by docking their smartphones – by nearly a 2-to-1 margin – over having such features built into the vehicle.

“Consumers are indicating that they want their automotive technology to help improve safety while giving them more flexibility, even if it costs a little more,” added Chadsey. “Personalization is the future of the connected car. Drivers want to use technology they already know and love in their vehicles. By integrating technologies they already own, it also eliminates some of the technology usage issues plaguing the industry today.”

The AutoTechCast survey tallied responses from nearly 12,000 Americans over the age of 18 who own or lease their vehicle.