McBlog: Fiat Delivers a slap in the face. 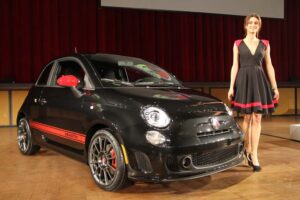 Supermodel Catinel Menghia poses with a Fiat 500 Abarth. She can slap us any day, but why is Fiat punching out its customers? asks McBlog author Denise McCluggage.

Doug, a friend and regular at Santa Fe’s Tuesday Car Table, test drove a Fiat 500 Cabriolet that I had for a week and loved it. But considering our city’s 7000-feet altitude decided a turbo was indicated. He’d wait for the Abarth. He told Fred Vang, another Car Table regular, to order one for him. That’s what Fred does, connects people and cars.

As a Personal Car Consultant he helps clients decide what new car best suits their needs and does all the wheeling-dealing and sees that they get the best deal delivered ding-free and clean to their door.

Fred is fond of telling clients: “You seem to know what you want but do me a favor: dance with a couple more before you get married.”

In this case since Doug had driven a number of alternatives, the dancing was Fred running numbers, checking with many sources for prices on three cars, all with Doug’s options. The three: Mini Cooper S, VW Golf GTI and the Fiat Abarth.

Fred compiled the numbers on a grid and presented them to Doug with a detailed explanation. Doug said it was like “a slap in the face” like in the Fiat Abarth ad featuring the leggy model Catrinel Menghia, dressed in red and black. And that’s why Doug arrived at our monthly Car Table driving a new VW Golf GTI.

Fiat had better pay attention to this. Here was a guy dead-cert he wanted a Fiat Abarth – no need to sell him on a small Italian car returning to a market where it left the rubble of a less-than-stellar reputation. Doug was pre-primed and hot to foxtrot.

Money. And way more than enough to make his decision a no-brainer. Never mind the dance.

Fred blames a certain old-fashioned stodginess he has found in some American-car dealers particularly. And it is Chrysler that is selling the Fiat. “They want to do it their way, the way they have always done it.” Fred’s way, he is certain, is better for the customer. He is a proponent of leasing. “A good lease – a good lease – reduces monthly payments by half,” he says. And having been a new car dealer for a number of years as well as selling cars from college days onward he understands the intricacies of ways to acquire a car. (Even “One-Pay Lease,” which is great for people who want a guaranteed residual but don’t like to make monthly payments…let him explain: fredvang@earthlink.net.)

What sells Fred on leasing is, for one, the guaranteed residual value of a car. You know what it will be worth – no hoping or guessing. The leasing contract specifies that value, guarantees it. When the lease ends the customer can compare current market value of the car with its residual value. Then he either buys the car or walks away, unencumbered. (Or negotiates with the leasing company for an even better deal.) Either way he is in the driver’s seat. “In these days,” Fred says, “with technology changing so radically knowing that you’re free of sudden changes in market values makes leasing even more desirable.”

One after another Chrysler/Fiat dealer said to him when he called about acquiring a Fiat Abarth.: “You don’t want to lease,” “We don’t do leases,” or “We don’t have the software for leasing.” The dealerships that did lease offered a 42-month (3½ year) lease rather than the more traditional 36 month (3-year). That helped mask the uncommonly high money factor and made comparisons more difficult for the average math-challenged buyer.

So for the head-to-head match-up of the VW Golf GTi. (The Mini’s figures were in the approximate middle and are not included here.)

And what monthly payment does all that come to? Fred showed the figures writ Sharpee large. The Fiat Abarth would cost $569 a month for 42 months; the VW Golf GTI, $299 for 36 months. That was the slap in Doug’s face. The Golf was $270 a month less, nearly half. And buying a GTI certainly didn’t mean “settling” for anything. The VW is a dandy car. Doug is a twice happy man.

I asked Fred: “What does that price differential mean?” Fred: “It means Fiat has to count on buyers who are cloaked in ignorance.”

“But. But…” My sputtering came from a deep fondness for Fiat, one that survived several different versions owned during the Fix It Again Tony years. “Isn’t there something Fiat can do?”

And yes there is. But not much. It means somehow making up that $270. Harder to do without an in-house financing company which Chrysler does not have. Chrysler might get a bank to raise the residual value to, say, 59% with the agreement that if resale value fell short they would make up the difference. It is not an unknown ploy when a car needs a boost in reputation or sales. But maybe Chrysler thinks that the Fiat Abarth’s charm will induce early adopters to step up to the window with money in hand and no consultant in tow.

However Chrysler works with Ally Financial and Chase Auto Finance. The later particularly is known to have been part of Subaru’s creative promotions, specials, rate reductions, delayed first payments and residual values st high. Interestingly on May 22 Chrysler did announce a program (good to the end of the month) that would delay first payment for three months on any new 2012 Chrysler, Jeep, Ram and Fiat models.

As for buyers just looking for a good price on a good car it would behoove them to arrive any Tuesday at noon at the Santa Fe Bar and Grill, find the Tuesday Car Table bunch and ask: “Which one here is Fred Vang?”