Volkswagen Up! Named World Car of the Year 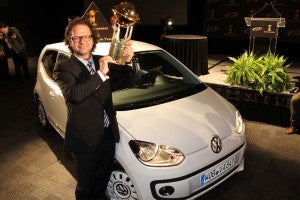 Lead designer Oliver Stefani olds the World Car of the Year award for the Volkswagen Up!

The pint-sized Volkswagen Up! has nabbed a big honor, winning the sought-after World Car of the Year trophy during a morning session at the 2012 New York Auto Show.

The victory took many observers by surprise, especially considering the minicar was going up for the award against the widely-hailed and more universally available updates of the BMW 3-Series and Porsche 911.

“Our goal was always to make something small great,” said Olivier Stefani, the lead designer on the Up! program, which has become one of the centerpieces of VW’s push to go green – in many ways serving as the modern-day alternative to the legendary Volkswagen Beetle.

The World Car awards, now in their sixth year, are the result of voting by 64 motoring journalists based on every continent short of Antarctica, and “reflect the worldwide realities of making (vehicles) successful in the global auto industry,” said Matt Davis, one of the program’s chief organizers.

Along with the main World Car of the Year award, there were three other trophies to be distributed, including World Green Car, which went to the Mercedes-Benz S250 CDI Blue Efficiency diesel sedan.

That marks a significant shift in the industry, suggested the maker’s Christopher Horn, who added that the idea “of a 4-cylinder engine in a Mercedes S-Class was something unheard of a few years ago.”

Like the VW Up!, the S250 is not currently available in the U.S. market, Horn noted, but he said the underlying powertrain will appear in the 2013 update of the Mercedes-Benz GLK crossover-utility vehicle.

Land Rover, meanwhile, received some much-welcomed support for its shift in strategy, the World Design of the Year award going to the maker’s new Range Rover Evoq – its first-ever crossover-based utility vehicle.

“I like to say that great design is the gateway to customer desirability because it makes an emotional connection,” said Land Rover chief designer Gerry McGovern.

Porsche might have lost the World Car trophy but its seventh-generation 911 sports car didn’t leave empty-handed, so to speak, the 2013 remake being named World Performance Car of the Year.

“The car has become an icon over the past 50 years,” said Porsche Cars North America CEO Detlev von Platen.  “This is encouragement to continue for another 50.”