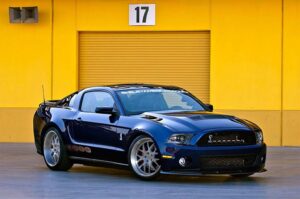 When Carroll Shelby says he’s got a new muscle car on tap, take him seriously.  The legendary automotive raconteur’s latest take on the Mustang will deliver enough tire-squealing torque and horsepower to make gold-chained Ferraristas duck for cover.

That’s 950 hp, to be precise, only slightly less than the $1.4 million Bugatti Veyron ultracar makes.  And that’s for the street legal version of the Shelby 1000 that will take its bow at the New York Auto Show next week.  The track-ready pony car bumps the number all the way up to 1,100 horsepower.

Since the former race car driver-cum-automotive entrepreneur first teamed up with Lee Iacocca, back in the mid-‘60s, Shelby has never shied away from the challenge of pumping a little more power out of a Mustang.  The latest offering takes things one very large step beyond the last Mustang upgrade from Shelby American, the GT500 Super Snake “only” able to make a measly 800 hp.

Says Shelby American CEO John Luft, the Shelby 1000 targets “anybody who has need for speed.”

Make that anybody who has the need – and the bank account to put that power to the pavement.  The street version of the Shelby 1000 will set you back $149,995.  That doesn’t cover speeding tickets, insurance – or the 2012 Shelby GT500 you’ll need to own in the first place.

The GT500 rolls off a conventional Ford assembly line and will cost you a seemingly paltry $48,810.  But then you ship or drive it out to the Nevada desert, about 20 miles from Las Vegas, where Shelby American runs a conversion shop.

What eventually rolls out may look a lot like what you came in with but there’s really not much left over from the original car.  The factory-stock 5.4-liter V-8 is completely torn down and reassembled using new rods, piston and crankshaft.  About the only thing left is the original block.

Other updates focus on improved handling and stopping capabilities with 6 pistons in front and 4 pistons in the rear, while the suspension includes new struts, sway bars and bushings.  The new solid driveshaft is connected to a 9-inch rear end.  Exterior cues incorporate aerodynamics while maintaining a stealthy appearance.  The hood, rear panel and splitter are functional pieces.

The Shelby 1000 project was launched almost on a whim, the 89-year-old Carroll Shelby pronouncing his desire to build a Mustang with 1,000 horsepower.  Luft and his team have long known better than to say no.

“Carroll Shelby is a visionary who has pushed the boundaries of performance his entire life,” said Luft.  “He challenged the Shelby American team to develop the Shelby 1000 and wanted to unveil this amazing new Shelby at the New York Auto Show celebrating 50 years since he unveiled the very first Shelby Cobra that changed the face of high performance.”

It’s no surprise Shelby American has designated the more powerful model for track use only, but what sort of road might one run a “street” car making 950 hp down?  Not a problem, Luft suggested to USA Today’s Chris Woodyard, insisting that in traffic, the Shelby 1000 is “stealth and below the radar.”

Shelby American plans to produce about 1,000 of the monsters, which are more like Clydesdales than ponies.  According to Luft, about a quarter of them have already been claimed.