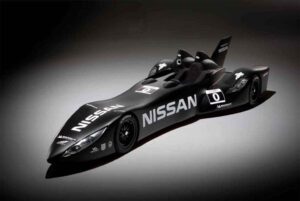 Nissan has put its name on the DeltaWing racer as its title sponsor.

Over more than a century of motor sports, the racing world has often been transformed by dramatic shifts in design.  Today, aerodynamics can play as significant a role as the powertrain in a race car – as fans of the Formula One world can readily attest.

Is the DeltaWing project ready to unleash the next big revolution?  The dart-like concept, which has more visually in common with a fighter aircraft than a NASCAR or even an Indy racer, is set to get its first big test during the unforgiving 24 Hours of Le Mans thanks to the project’s latest sponsor, Nissan.

The Japanese maker says it is “aiming to change the face of endurance racing forever” with what has now been renamed the Nissan DeltaWing.  That’s no minor boast when you consider what the exotic concept will be going up against, including the likes of Audi’s latest diesel-powered monster, the R18 eTron Quattro. 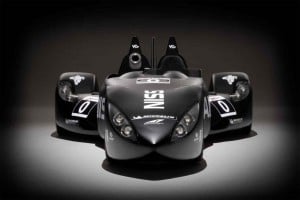 The DeltaWing will have significantly less power than LMP1 models racing Le Mans but the goal is to offset that with a lighter weight, highly aerodynamic design.

The Nissan DeltaWing will make about 200 horsepower less than the 510-hp Audi, which has added a battery boost system to give it even more power coming out of the corners.  And some of the top-line LMP1 racers – as our friends at Autoblog note – make even more horsepower.

The DeltaWing will have to keep up with a turbocharged, direct-injection 1.6-liter I-4 engine that traces its roots back to the mundane powerplant in the Nissan Juke.  But it weighs about half as much as the bigger engines that traditionally dominate LeMans.  And then there are the promised aerodynamic advantages of the DeltaWing design itself.

“Nissan has provided us with our first choice engine. It’s a spectacular piece. We’ve got the engine of our dreams: it’s the right weight, has the right power and it’s phenomenally efficient,” said British designer Ben Bowlby. 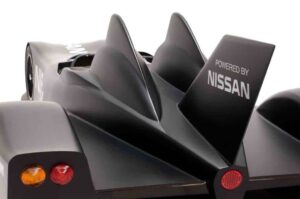 The DeltaWing's power will come from a turbocharged 1.6-liter Nissan powertrain.

He’s the pen behind the innovative concept, which was brought to reality with the assistance of Georgia race track owner and automotive entrepreneur Don Panoz, along with the legendary Dan Gurney’s All-American Racers.  They’ve been peddling the DeltaWing concept for several years, hoping to find a race circuit willing to make the sort of grand jump that seems increasingly uncommon in motor sports today – but which once defined series like F1, IndyCar and LeMans.

The latter circuit’s organizer, the Automobile Club de l’Ouest, or ACO, is taking an extremely cautious approach.  The Nissan DeltaWing will wear number “0” and won’t even be counted in the official results.  It will meanwhile get housed in Garage 56, which has traditionally been used for entries featuring new technology previously unseen in motor sports.

Joining early sponsor Michelin, Nissan Executive Vice President Andy Palmer said the maker signed on in order to “showcase the pioneering technology that will show one potential direction for the future of motorsport and will feed into the research and development of future technologies, that filter down to Nissan’s road car product range.”