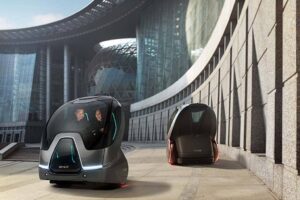 Slip into your EN-VI pod and plug in a destination before turning the driving duties over to your vehicle? That's one increasingly real vision of the future.

It sounds easy enough. Pilot a sport-utility vehicle around a banked test track at General Motors Milford Proving Ground. But there is a catch and it’s a big one: while you’re sitting behind the wheel you’ll also be sitting on your hands, letting a complex network of cameras, radar sensors and computers handle the actual job of driving at speeds approaching 70 miles per hour.

Unnerving, most definitely, but the system, dubbed Super Cruise” by GM engineers and researchers, offers a glimpse into the future of motoring. Once you get the SUV is up and moving, the system works flawlessly. The computer keeps the vehicle perfect centered in the lane even when the SUV is moving at good clip.

The advanced version of the adaptive cruise control modulates the speeds to keep pace with the rest of the – manually operated — traffic on the test traffic. It slows when the researchers simulate a back-up around a freeway off ramp and speeds up as the traffic eases. We’re quickly back up to freeway speed. 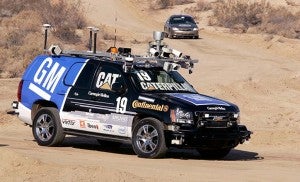 GM teamed up with Carnegie Mellon University to win the DARPA challenge with this autonomous car a few years back.

Jeremy Salinger, a GM innovation program manager, who is coaching me through the simulation, coaxes me into a passing maneuver.  I briefly take over the vehicle from the computer that’s tucked into the back seat, but it quickly takes back control once we’ve passed the other vehicle.

What’s impressive about the GM system is how confident it seems, which in turn builds confidence in the system itself. It holds its given path the on test track very steadily, while the radar-based signals help it maintain its distance from other vehicles.

“The secret sauce is make it look easy,” says Salinger, who recites the standard company line that autonomous driving systems could be available for use before the end of the decade.

Wait a second – that’s only eight years away.  But the technology — from cameras, to radar and sensors and the piloting software that distills the information from the various data sources — is developing amazingly fast.

GM is just one of many companies betting on autonomous technology.  Researchers at Volkswagen Group of America Electronic Research Laboratory outside of San Francisco are predicting an autonomous driving system could be ready for the market within five years.

Google, meanwhile, though best known for its search engine, has clocked 10s of thousands of miles with its own autonomous vehicle test fleet.

The pace of development is becoming so rapid that Nevada recently became the first state to enact a law specifically regulating the operation of autonomous vehicles.  A human driver must be seated behind the wheel and ready to take over, for one thing.  And, no, drinking and driving is still a very serious no-no.

Alan Taub, GM vice president of global research, recalls how GM and its partners from Carnegie Mellon in Pittsburgh won a $2 million prize put up in 2007 by DARPA, the US Department of Defense’s research agency, which nurtures the kind of advanced research that led to creation of the internet, stealth aircraft and deadly pilotless drones.

The research and experimentation has move steadily ahead and is already at least two generations beyond where the DARPA vehicle was five years ago. Moreover, autonomous driving doesn’t have to be enormously expensive. The system in the GM prototype relies on most of the same sensors and cameras used for safety systems that help protect a vehicles and its occupants now – such as the collision avoidance systems found in the new Cadillac XTS.

The real expense is integrating the different sensors and elements such as GPS.

Moreover, it’s not only mass market companies, such as GM and Volkswagen, that have gotten the autonomous driving bug – performance oriented brands such as Audi and BMW also are experimenting with autonomous driving with their own versions of GM’s super cruise system.

That may come as a surprise with a brand like BMW, which bills its products “the ultimate driving machines.”  But former CEO Bernd Pischetsrieder, who kicked off the BMW autonomous driving program, stressed that while it’s great to have your hands on the wheel when you’re shooting along the Autobahn at 125 mph, “why do you want to have to drive when you’re stuck in traffic, inching along at 10?”

Will autonomous vehicles really make the jump from science fiction to reality?

GM’s Taub said two major factors are pushing the development process which, in the past, has seemed to some skeptics little more than a job creation program for trial lawyers.

But autonomous vehicles could make it easier for aging baby boomers, who have dictated automotive tastes and styles for a half century, to remain behind the wheel for longer than in past generations.

In addition, the steady increase in distracted driving may make the autonomous vehicle practically inevitable.

“It’s a safety system,” Taub said. “Fifteen years ago if you saw somebody weaving (in traffic), you assumed somebody had had too much to drink. Now because of distracted driving and texting , you can’t be sure.”

Autonomous driving systems such as Super Cruise clearly have the potential to protect drivers from the bad habits they have developed, Taub said.